For Feb. 9, 2016, here's the top stock market news and stocks to watch based on today's market moves… 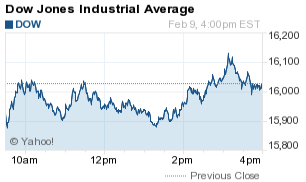 On the economic front, the U.S. Commerce Department announced domestic wholesale inventories fell for the third straight month in December. According to the agency's report, U.S. companies aimed to reduce unsold products, news that could signal another downward revision of fourth-quarter economic growth. Meanwhile, the JOLTS survey indicated job openings increased during the month of December.

Many investors fear we're headed for a stock market crash, correction, or bear market. Here's what our team of Money Morning experts predict will happen in 2016…