The original story is below. 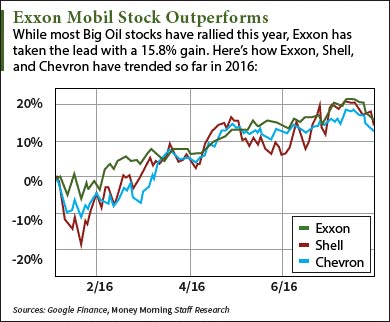 Exxon Mobil stock has been one of the best-performing crude oil stocks of the year.

But this rally in the Exxon Mobil stock price could end after the company releases its Q2 earnings report today (Friday, July 29)…

Despite their 26% rise last quarter, WTI crude oil prices only traded between $38 and $48 a barrel in Q2. That was far below the mid-$50 range producers need to profitably drill for oil. In other words, large oil companies like Exxon are in for a steep plunge in profits this earnings season.

Editor's Note: Amazon reports earnings today, and there's one metric everyone's watching that will dictate where Amazon stock goes in 2016. Find out more.

That's why we're going to talk about whether or not you should buy Exxon Mobil stock as a long-term investment today.

First, here's what to expect from the Exxon earnings report this morning…

Despite the sharp declines on the top and bottom lines, some analysts expect Exxon to increase its dividend. Goldman Sachs Group Inc. (NYSE: GS) stated the oil giant is poised to raise its payout for a couple of reasons. These include Exxon's $2.5 billion acquisition of InterOil Corp. (NYSE: IOC) expected to close this fall and the discovery of an offshore oil field near Guyana.

Don't Miss This: Stocks with high dividend payouts provide triple the returns of non-dividend stocks. And these "dividend kings" have increased payouts for 50 straight years…

In fact, Moors – a 40-year veteran of the global oil industry – advises avoiding all Big Oil stocks. These are the eight biggest independent oil companies in the world and include…

One reason why Big Oil stocks are a bad investment is the companies' rising debt levels.

You see, many analysts have upgraded several Big Oil stocks over the past few months. Back in May, Argus upgraded Exxon stock to a "Buy" rating. French bank Société Générale gave BP stock the same recommendation earlier this year and just reiterated the "Buy" rating yesterday (Wednesday, July 27).

What these banks don't talk about in their upgrade reports is how the debt levels of these oil titans have increased tenfold in the last decade. Their return on drilling and capital expenditure projects has dropped from 22% to 7% since 2006. That's because these firms spent billions on drilling projects that never yielded big profits due to the crude oil price crash from 2014 to February 2016.

"Avoid 'Big Oil' at all costs," Moors explained to Oil & Energy Investor subscribers. "Those aren't companies that are weathering a crisis – those are companies in the middle of a crisis."

That's why Moors recently recommended a better way to profit from the oil market in 2016.

In fact, this particular stock lets you make money from crude oil prices without investing in oil at all.

Moors recommended this company four months ago. The stock price has rocketed more than 84% since then, and analysts predict it could soar another 81% in the next year.