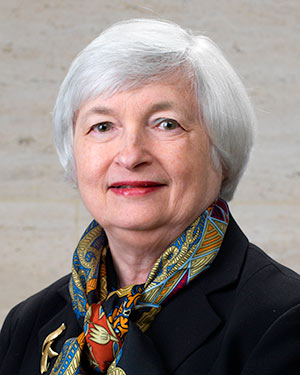 The Dow Jones Industrial Average today (Friday, Aug. 26) turned negative as traders prepare for Federal Reserve Chair Janet Yellen's speech on monetary policy at 10 a.m. Investors are looking for any clues into the timing of the next interest rate hike by the central bank.

The annual U.S. Federal Reserve meeting kicked off yesterday (Thursday) in Jackson Hole, Wyoming. The meeting will conclude today. Of course, one has to remember that this meeting consists of central bankers who have engaged in reckless policy experimentation for decades. If the United States wants to restore sanity to its economy, here's how the nation can end the Federal Reserve and replace this scheming central bank.

On Thursday, the Dow Jones slipped 33 points after two more members of the Federal Reserve argued the case for an interest rate hike in the coming months

The real story behind today's central banking symposium is the ongoing rush of countries to drop interest rates into negative territory. That's forcing a lot of different entities to purchase negative-yield bonds. Rather than buy debt, Money Morning Global Credit Strategist Michael Lewitt recommends that you buy this alternative investment instead.

The Dow Jones Industrial Average projects an 11-point decline as investors prepare for today's speech by Fed Chair Janet Yellen. Markets still appear unconvinced the central bank is going to raise interest rates in the near term. According to CME FedWatch, the probability of a rate hike in September sits at a slim 24%. Odds of a move in November stand at 28%. For December, they're 43%. Here's everything you need to know about this week's Fed meeting.

Don't Miss: Biotech IPOs are on fire. And we believe one small company is about to skyrocket. In fact, it just made a major announcement that could set a massive windfall in action. Find out more…

The silver spot price per ounce is down roughly 5% over the last five sessions. The price decline comes as Janet Yellen's prepares to deliver her highly anticipated speech. With silver prices falling, now might be a perfect buying opportunity. We provide our latest 2016 silver forecast, right here.

But the big story today is the battle of hedge fund managers over Herbalife Ltd. (NYSE: HLF). Bill Ackman and Carl Icahn are back in the news on word that the latter sold his $1 billion stake in the health marketing company. Shares of HLF stock are off nearly 6%. The two billionaire hedge fund managers have been engaged in a public battle over the future of the company. Ackman has been shorting the company - long convinced that the firm's marketing program can be classified as a "Ponzi Scheme." Icahn held a long position. This morning, Ackman said investment bank Jeffries Group approached him to buy a stake in Herbalife.

Now, here are the biggest stocks to keep an eye on today, including one of the most controversial companies in the pharmaceutical industry right now...

Up Next: Become a Conservative-Aggressive Investor with These Trading Tips