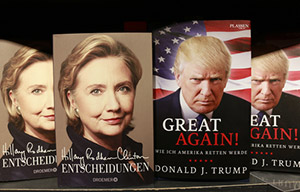 The Dow Jones Industrial Average today is down as investors focus on the presidential election and the upcoming meeting among OPEC suppliers.

The global oil cartel is set to discuss production levels and oil prices over several days in Algeria. As we explained last week, the markets shouldn't anticipate a deal due to geopolitical tensions between Saudi Arabia and Iran.

However, Money Morning Global Energy Strategist Dr. Kent Moors projects that a deal will eventually happen. Here's when and why.

Today, the markets are also speculating on the timing of the next interest rate hike after the U.S. Federal Reserve voted to leave interest rates unchanged during its September meeting.

Here's what happened at the FOMC meeting last week and what it means for your money.

On Friday, the Dow fell more than 130 points as investors lost hope for a production freeze by OPEC.

Now let's look at the most important market events and stocks to watch today, plus your economic calendar, for Sept. 26, 2016.

The Dow Jones Industrial Average projects an 85-point decline at the opening bell.

Investors are keeping a close eye on statements from members of the U.S. Federal Reserve. But more important – traders are weary about last week's announcement by the Bank of Japan that the central bank will hold its benchmark interest rate in negative territory. As we explain, this is just the latest stock market correction signal. The Bank of Japan is operating dangerously as record low interest rates have forced investors to seek returns in an overheated stock market.

Trending: How a Fed Rate Hike Will Affect Your Mortgage Rate

We're going to explain this policy today, and once we do, you'll see why a stock market correction is due.

Oil prices were pushing higher this morning as energy officials from OPEC meet in Algeria.

But the big story today is the first U.S. presidential debate. GOP nominee Donald Trump and Democratic nominee Hillary Clinton will face off for 90 minutes tonight. Experts project that this could be the most-watched debate in election history. The two candidates will debate issues on the economy, terrorism, immigration, and – of course – Clinton's email server. But one of the most important topics will center on the Syrian refugee crisis. Here's what to expect from both candidates on the issue and why it matters to the global economy.

4092 Reads
The Best Penny Stocks to Own Right Now – 185% Profit Potential
The best penny stocks to own are the highest reward for the lowest risk. And there are preferably a lot of insiders buying up shares in good faith. Then I can trust the high analyst projections - like the 185% growth target on our top penny stock today.