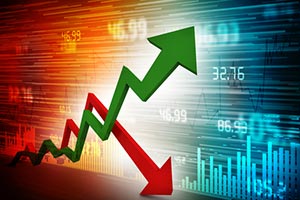 This morning, the Dow Jones Industrial Average was pushing higher as investors weigh another round of economic data from the United States and China.

Investors are also reviewing a number of blue-chip companies that are reporting earnings, and traders are still speculating on the timing of the next interest rate hike.

Today, investors be weighing statements from three members of the Federal Reserve to determine the timing of the next rate hike. According to CME Group's FedWatch Tool, the probability of a rate hike in December sits just south of 70%.

On Tuesday, the Dow rallied 75 points as investors weighed positive earnings results. The S&P 500 and the Nasdaq had their best week in a month due to increased optimism on earnings expectations.

Now let's look at the most important market events and stocks to watch today, plus your economic calendar, for Oct. 19, 2016.

The Dow Jones Industrial Average projected an 11-point gain as investors eye more reports from Wall Street and the Federal Reserve releases its Beige Book filled with commentary on the economy.

In today's trading session, expect to hear quite a bit about China's economy. This morning, the country reported a slew of positive economic data that should improve investor sentiment on the health of the world's second-largest economy. In the third quarter, China's economy grew by 6.7%, a figure that met expectations. This is the second straight quarter that China reported 6.7% quarterly growth. The nation also reported strong retail sales. In September, Chinese retail figures increased by 10.7%.

But there's always one figure that spooks investors. The country reported that its industrial production figure came in at 6.1% for September. That number fell short of Wall Street estimates.

It's been a positive week for financial stocks as investors cheer strong earnings reports and expectations rise for the Federal Reserve to increase interest rates in December. But while everyone is growing more optimistic, another big story is brewing that everyone seems to have ignored. There is a crisis in the consumer debt markets... and it all comes back to one terrible word from the 2009 financial crisis: subprime lending.

Oil prices were on the move ahead of today's inventory update by the Energy Information Administration. Crude prices rose after a positive OPEC statement bolstered trader enthusiasm and the American Petroleum Institute said that U.S. crude inventories fell by 3.8 million barrels last week. Saudi Arabian Energy Minister Khalid al-Falih said this morning that the markets were moving back toward a stronger supply and demand balance, news that should help alleviate the global glut that has driven down prices.