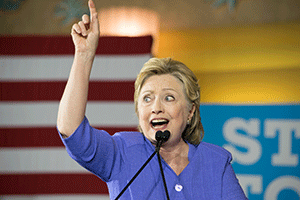 Hillary Clinton could pardon herself as the newly elected President of the United States...

But events would have to play out "just so" for that to be the case.

Here are the exact three events in chronological order that would have to happen...

The first cog in the wheel necessary for Clinton to pardon herself has actually already occurred...

Last Friday (Oct. 28), FBI Director James Comey announced the agency was reopening its investigation into the Democratic presidential candidate's use of a private email server while she was secretary of state.

Reminder: Some nationally classified bits of information ended up on Clinton's private server, which put the United States at risk because the server itself was unclassified and privy to cyberattacks. However, there was not enough evidence that Clinton used the server against the law willfully (with the knowledge of committing a crime) -- at the time, at least...

That may no longer be the case with the FBI's newly reopened investigation...

We'll just have to wait until the FBI combs through all 650,000 recently unearthed emails -- this time linked to the former first lady's Chief of Staff Huma Abedin and her estranged husband and former New York Congressman Anthony Weiner.

If the bureau concludes Clinton did in fact use the private server against the law willfully, based on this new batch of emails, that's "necessary event no. 2."

However, there's way too much info for the FBI to sift through prior to Election Day on Nov. 8 - which means that if federal indictment charges are pursued against Clinton at some point, they wouldn't come until much later.

The third necessary event in this chronology is that Clinton wins the presidency. That way, if the FBI does ultimately pursue indictment, she would have the power to pardon herself.

Now, this is a stretch of a possibility, but not an impossible one. And if events keep playing out such that these three "necessary events" come to pass, it could trigger an unprecedented event of epic political proportions.

Here's exactly how Clinton would have the power to pardon her own misdeed under U.S. law...

How Hillary Clinton Could Pardon Herself

The president's pardon power comes from Article II, Section 2 of the U.S. Constitution. It states: "The President... shall have Power to grant Reprieves and Pardons for Offenses against the United States, except in Cases of Impeachment."

Based on the language of this section, the only limits placed on such power are as follows:

Would Clinton Have to Be Indicted Before She Used Her Pardon Power?

No, and in fact, there's precedent for this...

President Gerald Ford issued a blanket pardon to former President Richard Nixon on Sept. 8, 1974. Nixon had not been charged with any crimes... yet. He had only been named as "an unindicted co-conspirator" in some of the Watergate-related matters. These matters did, however, lead to Nixon's resignation.

Nixon might well have been subjected to indictment at a later point, but President Ford took the initiative early in his term to grant him reprieve. This reprieve made it impossible for Nixon to face indictment charges at a later date, much less a conviction.

For Congress to pursue impeaching Clinton (No. 2 above), the House and Senate would have to find that she committed a "high crime or misdemeanor" - the necessary grounds for impeachment per the Constitution. Such "high crimes and misdemeanors" include:

On Nov. 1, U.S. Sen. Ron Johnson (R-WS) told The Beloit Daily News that he believes Clinton indeed committed such high crimes as secretary of state by violating the two following statues in the U.S. Code of Conduct:

So the high crimes attached to these statutes could be "misuse of assets" and "treason" for "mishandling information related to national defense." At least, that's according to Sen. Johnson, who said, "I'm not a lawyer, but this is clearly written. I would say yes, high crime or misdemeanor. I believe she is in violation of both laws," reported The Beloit Daily News on Monday.

Must Read: Who Pays for Obamacare?

But there's a catch to all this...

You see, even though Clinton can't pardon her way out of impeachment proceedings, there's still an archaic 173-year-old law that would keep Congress at bay no matter what...

That law (Article I, Section 3 of the Constitution) provides that a president can only be tried for impeachment if his/her crimes occurred while in office.

Clinton was obviously not president when she (mis)used her personal email server. That means Congress could not pursue impeachment proceedings.

With Congress completely out of the way, Hillary Clinton could pardon herself of having committed a crime as President of the United States.

Should there be a President Hillary Clinton, she'll likely rule with an iron fist.

He thinks we'll soon be the land of the "not-so-free," where SUVs will be banned because they're "ecologically unsafe" and the NRA will be dismantled.

Click here to read more about this troubling future scenario under a Clinton-in-Chief...