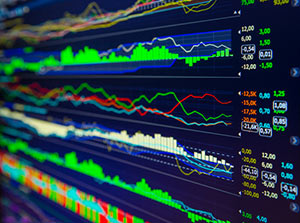 This morning, the Dow Jones Industrial Average is flat as investors eye the U.S. Federal Reserve and oil prices push higher. Markets are facing a very busy day of economic data after a somewhat lackluster morning for the global markets.

On Wednesday, the Dow slipped 54 points as investors listened to statements from various members of the Fed and confirmed their suspicions that the central bank will finally hike interest rates next month for the first time since December 2015.

The Dow Jones Industrial Average projected a one-point gain as investors weighed another round of earnings reports and a statement by Federal Reserve Chair Janet Yellen suggesting that the central bank may raise interest rates very soon. Although a rate hike next month would likely be small, it would be another step toward normalization of interest rates after a decade of the Fed's zero-interest-rate policy (ZIRP).

The price of oil gained on increased optimism over the OPEC production deal. This morning, Saudi Energy Minister Khalid al-Falih said he expects that the global oil cartel will be able to expand on its production deal that it reached in September. OPEC will meet in Algeria later this month to discuss how the cartel might be able to court non-cartel members to join the cause in order to cap production and support crude prices. The increased optimism offset concerns about a building supply glut and rising crude inventories in the United States. On Wednesday, the U.S. Energy Information Administration announced that crude stocks increased by 5.3 million barrels last week, easily topping analyst expectations of a 1.5 million barrel build.

But the big news this morning is happening with the Federal Reserve. On Thursday, Federal Reserve Chair Janet Yellen said that the central bank could raise interest rates very soon if economic data continues to show improvements in the jobs market and rising inflation. Yellen said that the economy still has a bit of room to run before the Fed is totally confident that inflation will meet the bank's target.

The Fed's next and final meeting of 2016 will happen in December. According to CME Group's FedWatch Tool, the probability of a rate hike in December sits at 90%.