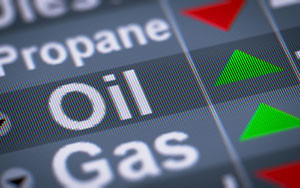 Today is the final trading day of November, and the Dow Jones Industrial Average is pushing higher again.

It's been a wild month that has seen the S&P 500 gain more than 3.7% despite Donald Trump's presidency, new concerns about China's financial system, speculation on OPEC's production meeting, and structural challenges in European markets.

On Tuesday, the Dow added 54 points after an active day of economic data that showed President-elect Donald Trump would inherit a strengthening economy. According to the U.S. Commerce Department, Q3 GDP expanded at a rate of 3.2%.

The Dow Jones Industrial Average projected a 37-point gain as oil prices rallied on OPEC production news and investors awaited private sector jobs data from Automatic Data Processing. According to Estimize, analysts expect that the private sector created 175,000 jobs in November. This figure will set the tone for Friday's release of the official November unemployment number from the U.S. Labor Department.

The Federal Reserve is back in focus when three members of the central bank offer speeches on monetary policy. These talks could provide some clues into the timing of the central bank's next effort to raise interest rates. The December FOMC meeting kicks off in two weeks and offers the central bank the chance to raise rates for the first time since 2015.

The price of crude oil was surging this morning on the prospects of a deal at the November OPEC meeting. The global cartel's production meeting kicked off today, and the stakes are high for the global energy market. At today's meeting, the cartel will try to reach its first official production agreement since 2008 in a bid to raise global crude oil prices to at least $55 per barrel.

Later today, watch the U.S. Energy Information Administration, which will release the weekly inventory levels in the United States. Any drawdown in domestic crude could support today's rally.

The WTI crude oil price today surged 7.7%, while the Brent crude oil price added 7.8% to top $50 per barrel. According to reports happening in Vienna, Austria, Saudi Arabia is expected to experience a big cut to its production to get its cartel rival Iran to accept a deal. Money Morning Global Energy Strategist Dr. Kent Moors says that this deal is close to happening, but if you want to make real money, you should start with these investments.

"By cutting corporate taxes, we're going to create huge economic growth, and we'll have huge personal income," Mnuchin told CNBC in an interview this morning. Mnuchin was Trump's top finance adviser during his campaign and has no government experience.