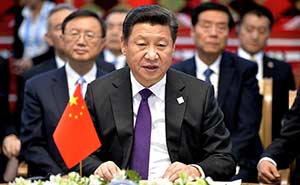 Three days before President-elect Donald Trump is set to be inaugurated as the 45th president of the United States, China has made itself known as a force with which Uncle Sam might not want to reckon.

Chinese President Xi Jinping spoke to a crowd at the World Economic Forum (WEF) in Davos, Switzerland, today, delivering what The Guardian referred to as a "a rollicking defense of globalization that would have been unthinkable from a Chinese leader in the past."

The meeting at Davos brings together some 2,500 top business leaders, international political leaders, and journalists for up to four days to discuss the world's most pressing economic issues.

Xi is indeed the first leader from Beijing to make such a Davos appearance.

And he used the opportunity to take direct aim at Donald Trump...

President Xi Reminds Davos That Everyone Loses in a Trade War

"Rather we should adapt to and guide economic globalization, cushion its negative impacts, and deliver its benefits for all countries."

Urgent: An incredibly rare gold market anomaly that only occurred twice within the past 20 years is about to happen again. Details here...

Xi then directed his statements towards U.S.-Sino trade relations, a topic Trump spoke of often while on the campaign trail. Specifically, the real estate mogul regularly denounced Beijing's trade policies and threatened to slap a tariff as high as 45% on Chinese imports.

"No one will emerge as a winner in a trade war," Xi said today, drawing applause from the crowd. "Pursuing protectionism is just like locking one's self in a dark room. Wind and rain might be kept outside, but so are light and air," he said.

In attendance of Xi's speech this morning was Anthony Scaramucci, the prominent New York financier who accepted a top post in the White House in Trump's admin on Jan. 1. Scaramucci has spoken a handful of times at this most recent WEF summit already. He is attending in an unofficial capacity, according to event organizers.

Most of the U.S. representation at Davos remains from President Barack Obama's administration, including Vice President Joe Biden and Secretary of State John Kerry.

Still, Scaramucci had a few things to say in response to President Xi's statements about a potential U.S.-China trade war...

"The president-elect wants a very strong relationship with China," Scaramucci claimed in a press briefing this morning. 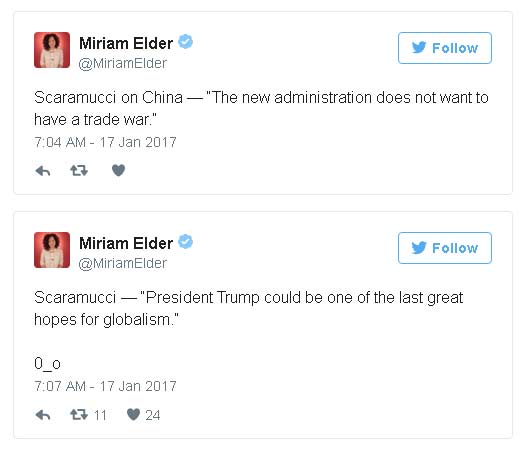 He also said the new administration only wants "free and fair trade."

When you consider the improving strength of the economy and mood of investors alongside prospects for future growth and wealth generation, the markets' path of least resistance is: up.

There's not much above our heads but thin blue air right now, and Money Morning Capital Wave Strategist Shah Gilani, one of the world's foremost experts on the credit crisis, believes anyone who says otherwise just isn't reading it right.

Here's how to play the market before Trump's inauguration...

More articles for you ...