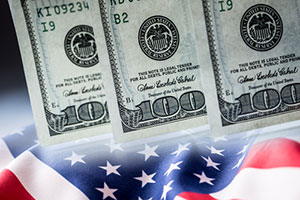 The Dow Jones Industrial Average today rallied by triple digits and was within striking distance of the psychological barrier of 20,000.

Meanwhile, the S&P 500 and the Nasdaq hit all-time highs thanks to a spike in technology and materials stocks. Eight of the major 10 S&P sectors were in the green today as investors weighed another round of earnings reports and the deregulatory efforts of President Donald Trump.

Shares of TransCanada Corp. (USA) (NYSE: TRP) added more than 3% after President Trump signed an executive order to advance the Keystone XL Pipeline and the Dakota Access pipelines. The two pipelines had been disputed and delayed by the Obama administration. Shares of Energy Transfer Partners LP (NYSE: ETP), the operator of the Dakota Access projects, climbed over 4%.

Crude oil prices were still reacting to Friday's announcement by Baker Hughes Inc. (NYSE: BHI) that the number of U.S. production rigs jumped by their highest levels in four months. But the bigger oil price news this week was OPEC's first compliance meeting on Sunday (Jan. 22) since agreeing to a production cut on Nov. 30. But that's not the only reason oil prices are moving today. Here's more on that meeting and where the price of oil heads from here.

But the biggest story today is President Donald Trump's plans to slash regulations across the country.

In a meeting with auto executives this morning, Trump said that domestic environmental regulations are "out of control." Trump committed to reducing regulations in order to help reduce the cost of building manufacturing centers here in the United States.