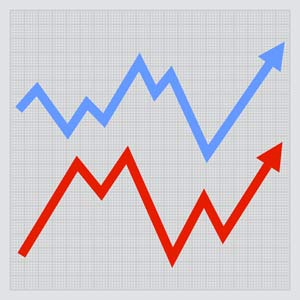 In Dow Joes news today, the Dow climbed closer to 21,000 thanks to an uptick in crude oil prices, energy stocks, and retail stocks.

Markets also cheered another round of positive earnings results and an important nomination by President Donald Trump to his administration.

Investors continue to push stocks higher on promises of Trump's tax reform, even though no details have been released.

The Dow climbed thanks to a positive earnings report from Wal-Mart Stores Inc. (NYSE: WMT) and another solid pop from Boeing Co. (NYSE: BA). Markets largely ignored a 5.3% drop in shares of HSBC Holdings Plc. (NYSE ADR: HSBC) after the London-based bank issued a dismal outlook.

Shares of WMT climbed 3% after the firm topped expectations in the previous quarter. The firm surprised investors with the announcement of higher comparable store sales. The firm also said it experienced a strong uptick in online sales, boosted by a new promotional program that reduces shipping costs. Wal-Mart is working diligently to capture market share in the e-commerce space from Amazon.com Inc. (Nasdaq: AMZN).

Today, markets were also speculating on the timing of the next interest rate hike by the U.S. Federal Reserve. Three members of the central bank gave speeches on the U.S. economy and monetary policy. The rate chatter will accelerate tomorrow when the Fed Open Market Committee releases minutes from its first meeting of 2017.

Oil prices have surged 50% over the last year, and Money Morning Global Energy Strategist Dr. Kent Moors forecasts another 20% rise in oil prices in 2017. For that reason, we're showing you the best crude oil stocks to buy in 2017 so you can profit from soaring oil prices.

Right now, Money Morning Global Credit Strategist Michael Lewitt argues that the markets are sitting in bubble territory. And that can be a very dangerous prospect for anyone with a retirement account.

If you want to make money when the smoke clears and reality begins to set in for the global markets, Michael has just served up two investment opportunities.

The Greatest Stock Track Record We've Ever Seen… If you want proof that you can make $100,000 starting with a small amount of money – then take a look at this new method of picking stocks we've uncovered. It's led to an astounding track record averaging FOUR double- or triple-digit peak gain winners every month for five straight years. Click here for details.