Access Your Profit Alerts
Sign Up for Money Morning and get your free report:
"The Best Stocks to Buy Now"
How to Buy Bitcoin
Twitter
Stocks: bdx, MSFT, RTN 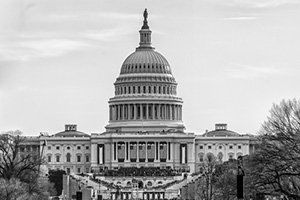 And investors are right to wonder. A market crash in 2017 is a serious possibility if Congress can't come to a funding agreement this week. The combination of overvalued stock prices with a destabilizing event like a government shutdown could lead to a massive sell-off.

Will There Be a Stock Market Crash?

The reason a destabilizing event like a government shutdown could cause the next stock market crash is that stocks are perilously high.

One of the biggest reasons behind historic stock market crashes has been extreme overvaluation, or a stock market bubble. The market rises far above the realistic value of its underlying assets.

Take the stock market crash of 1929, for example. The Dow soared over 300% between 1923 and 1929 due to a frenzy of speculation. People believed the stock market could only go up, and they took risks buying stocks. Amateur investors even borrowed over $120 billion to put into the stock market.

Must Read: Five Double-Digit Dividend Plays to Secure Your "Second Salary"
On Black Tuesday, Sept. 29, 1929, the market crashed. Because investors couldn't afford any losses, they sold immediately, sending stocks into a death spiral. The Dow lost 86% of its value between 1929 and 1936.

Similarly, the stock market crash of 2008 was the result of speculation driving up prices.

Housing prices doubled in the decade between 1996 and 2006. This again led to risky investing behavior, which further pushed up prices. As long as housing prices rose, people were willing to buy more expensive houses than they could afford and simply refinance later, after their home values inflated. Banks were more than willing to lend to anyone, even unqualified borrowers.

And Wall Street packaged up these mortgages and treated them like grade-A investments. But when the housing market faltered and foreclosures began to rise, Wall Street had no back-up plan. The stock market crashed.

Low interest rates have made borrowing money cheap and easy, and corporations have used the cheap money to buy up shares of their own stock.

The Fed slashed interest rates from over 5% to 0.25% in 2008 to combat the recession brought on by the 2008 stock market crash. They cut rates in hopes companies would use the cheap money to expand their businesses and grow the economy.

That's pushed stock prices higher, and to valuations that are historically high.

But the era of low interest rates is ending. The Fed has hiked interest rates three times in the last two years, and could raise rates twice more this year. That means as cheap money dries up, stocks might flatten.

Past government shutdowns fights saw stocks fall. During the 2011 fight over the debt ceiling, the Dow fell 10% between July and August. During the 2013 shutdown, the Dow dropped 2.5% in the last week of September. And during the battle in 2015, the Dow dipped 6% during the second half of August.

Don't Miss: Why One of Trump's Boldest Economic Promises Will Be Delayed Till 2018

While even a 10% drop wouldn't constitute a stock market crash, things are different now. As we mentioned above, stocks have gained 13% since Election Day as investor optimism about a Trump presidency grew. And with stocks at such overvalued levels, the instability of a government shutdown could be enough to crash the markets.

With the Republican-controlled Congress unable to pass its major healthcare bill, their ability to come to an agreement on an issue as thorny as the budget is in doubt. On top of that, they only have until Friday to hammer out an agreement.

And that's why investors need to be prepared. But Money Morning is here to help. We've got a strategy to protect your money from a stock market crash…