Billionaire Mark Cuban said this weekend that AI will cause mass unemployment. 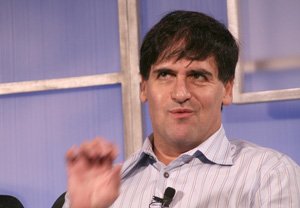 The "Shark Tank" star took to the stage at multimedia celeb festival OZY yesterday to warn that "however much change you saw over the past 10 years with the Apple (Nasdaq: AAPL) iPhone, that's nothing. There's going to be a lot of unemployed people replaced with technology and if we don't start dealing with that now, we're going to have some real problems."

Indeed, in September 2016, business trends think tank Forrester Research released an exhaustive report anticipating that robots will eliminate 6% of all U.S. jobs by 2021 - 10% of which will occur in the retail industry alone.

Mark Cuban Is Right About Job Loss, but Shouldn't Stop There

In fact, we're already seeing the disruption occur right before our eyes.

Don't Miss: How you could make $1.6 million or more by learning how to extract cash from these failing businesses. Find out more right here...

"E-commerce, the digital assault on traditional brick-and-mortar stores, isn't just winning battle after battle in the war for shoppers' attention and spending," Shah wrote on June 27. "It's changed the battlefield and the weapons being deployed to cut open consumers' pocketbooks and wallets."

Shah went on to explain that every retailer, no matter what they're selling, is employing some form of AI.

Or they're about to, because they have to in order to keep a competitive edge.

And IKEA offers an augmented reality program online that provides suggestions on furniture arrangements in real time while allowing shoppers to view how different products would look in their own homes.

But these companies are fighting an uphill battle. In fact, major retailers have already closed more than 4,000 stores in 2017 - thanks chiefly to e-commerce giant Amazon.com Inc.'s (Nasdaq: AMZN) intrusion into the market.

Amazon itself uses a number of AI features to predict everything from product demand to power search rankings, from creating and recommending deals to detecting fraud and translating site content.

"The new retail-killer meteors are AI and machine learning," Shah writes. "They're destroying companies and brands every day. And we're all over the winners... and especially the losers."

The "Retail Ice Age" Investment Strategy That Everyone Is Missing

The retail landscape is already littered with the corpses of recently deceased companies.

The truth is, there's a ton of money to be made on retail stocks - if you know what you're doing.

Shah is keeping his eye on companies like Macy's Inc. (NYSE: M), JCPenney Co. Inc. (NYSE: JCP), and Sears Holdings Corp. (Nasdaq: SHLD). Though these dead cats may bounce from time to time, their trajectory is decidedly downward.

But before you go shorting retailers left and right, there are a few things you should know.

Here, Shah explains how he earns big gains from the retail apocalypse by making prescient calls well in advance of a retail company's downfall.

I don't have to read this Article. Mark is correct. As fantastic as it is. It is going to control our lives. Those who stand behind the need of full control of the world. Are the ones who are in direct contact with are Extraterestrial friends.

Now! I really understand where "All" the gold in the world is going.

It is being traded for "Knowledge"..

Humans are nothing more than a race of slaves to there needs. Open your eyes. They are in control of our government and militaries and led those to believe that they hold the power of our planet. I hope to be done my agenda by this time as I will not be able to watch the destruction upon mankind. I to have been controlled by a implant of knowledge absorbed by a universal language which needs to be taught over time for those to connect to the stars.

There concerns like all of ours subconciously are that the human race is destroying our resources and by the time A.I. takes over the world completely. You shall start seeing the depletion of humans. It's already begun. I hate this but it's necessary to save this planet.

Enjoy this world as it is in full beauty.