Access Your Profit Alerts
Sign Up for Money Morning and get your free report:
"The Best Stocks to Buy Now"
How to Buy Bitcoin
Twitter
Stocks: TWTR

Many investors are looking back on 2017 as the year that they missed out on Bitcoin.

Bitcoin prices have surged from $963.66 per coin on Jan. 1 to $16,697.60 today, but those prices may look minuscule compared to where experts see the price of the cryptocurrency heading. 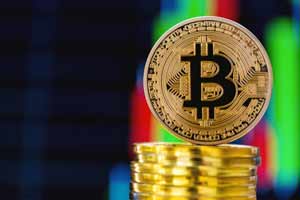 If you think you've missed out on the Bitcoin boom, we have two bullish predictions you have to see.

But before we get to that, we want to look back at the most important events of the year for the cryptocurrency.

With Bitcoin hovering just above $1,200, markets speculated that the U.S. government would finally introduce regulations that would legitimize cryptocurrency as a mainstream investment.

On this day, however, the SEC denied the application for a Bitcoin exchange-traded fund (ETF), a proposal brought forth by Tyler and Cameron Winklevoss.

A little more than two weeks after denying the Winklevoss Bitcoin ETF, the SEC doubled down on its stance.

This time, the SEC rejected an application for the SolidX Bitcoin Trust, an exchange-traded product that would have traded like a stock and tracked Bitcoin's price.

This was another blow to investors and Bitcoin enthusiasts, who hoped that U.S. regulators would provide greater legitimacy to the cryptocurrency markets.

At the time, Bitcoin prices were trading just above $1,000 per coin.

On April 1, Japan's Financial Services Agency enacted a law that officially recognized Bitcoin as a legitimate method of payment.

After months of debate, the law established capital requirements for Bitcoin exchanges and created rules around operations and cybersecurity.

This decision drew significant scrutiny in the wake of the Mt. Gox collapse.

One of the top cryptocurrency analysts in the world today didn't even make his first call on Bitcoin until July 2017.

Ronnie Moas, of Standpoint Research, issued his first "Buy" recommendation for Bitcoin, with a price target of $50,000 by 2027.

In his first short-term projection, Moas said that Bitcoin could hit $5,000 within a year. At the time, this was considered a very bullish outlook given that Bitcoin traded at just $2,564.06.

Bitcoin jitters and "bubble" talk picked up over the first two weeks of July.

Traders were speculating on the impact of the pending Segwit hard fork that was set for Aug. 1. The divide in the Bitcoin community centered on which version after the hard fork would better define the long-term vision of Bitcoin founder Satoshi Nakamoto.

Developers, miners, and investors have debated how to best scale Bitcoin for faster transactions and lower fees.

When everyone doesn't agree, a hard fork can be used to create a new coin.

On Aug. 1, a hard fork created Bitcoin Cash (BCH), and every Bitcoin owner received an equal amount of BCH. According to its website, Bitcoin Cash says it offers a reliable network that runs without congestion, as well allows BCH holders to "send money globally for pennies."

Sept. 4: China Cracks Down on ICOs

A little more than a week after markets speculated on China's interest in crypto, the nation stunned the world by freezing ICOs and ordering companies to return capital to investors.

The announcement was reminiscent of the 2013 ban by China on purchasing Bitcoin using the local yuan currency.

The groups also compared cryptocurrencies to a pyramid scheme.

Backers of the fork canceled their plans, arguing that they couldn't find enough support in the Bitcoin community.

This continued the debate over which version of Bitcoin - BTC or BCH - better fit the original vision of Nakamoto.

In late November, the price of Bitcoin finally topped $10,000 for the first time on U.S. and Korean exchanges.

Though the price had topped this level in Zimbabwe, the five-figure price pushed the market capitalization to the verge of $200 billion.

Due to overwhelming demand, Coinbase experienced its second major outage in less than a week.

The New York Times reported that Coinbase struggled to keep up with the surge of interest and demand in the cryptocurrency space.

Since January, the number of users on Coinbase's platform more than doubled. To start the year, Coinbase had 5.5 million users, a number that has swelled to 13.3 million by Nov. 30.

Yesterday, Bitcoin prices fluctuated between $13,226.60 and $15,850.60 ahead of Bitcoin futures being traded on the Chicago Board of Exchange (CBOE).

The CBOE has now established an opportunity for traders to take long and short positions on the cryptocurrency without having to own the underlying asset.

The CBOE was the first of multiple exchanges to announce plans for trading Bitcoin futures contracts. In addition, the Chicago Mercantile Exchange (CME), NASDAQ, and Tokyo Financial Exchange have all announced plans for similar derivative contracts.

Now that you're all caught up with the most important events of 2017 for Bitcoin, here's where prices could be headed in 2018...