Gold prices will start another epic run beginning Dec. 12 - the day the Federal Reserve will double down on QE3 at its Federal Open Market Committee (FOMC) meeting.

Decisions made at the Dec. 12 FOMC meeting could add as much as $2.2 trillion to the Fed's balance sheet over the next two years, which will turbocharge gold prices, silver prices and oil prices.

The FOMC is the select group within the Fed that sets monetary policy, such as interest rates and the bond-buying programs known as quantitative easing, or QE.

That the Fed will dramatically increase QE3, which launched in September with the monthly purchase of $40 billion in mortgage-backed securities (MBS), at the Dec. 12 FOMC meeting is almost a given; it practically has no choice.

The Fed probably would opt to extend Operation Twist - which has not added to the Fed's balance sheet as QE1, QE2 and QE3 have -- except that it is starting to run low on short-term securities to sell.

Yet the Fed committed in October to extending its easing policies as long as necessary to bring down unemployment and aid the U.S. economy. Its only option is to convert Operation Twist to a conventional bond-buying program - effectively doubling its QE3 money-printing.

The Stimulus for Silver Prices and Gold Prices

What matters to gold and silver prices, though, is not just the increased rate of QE3 but its likely duration.

The research team at Goldman Sachs estimated that the slow U.S. recovery will keep the Fed on this $85 billion-a-month money-printing binge for at least two years.

At that point, the tab for QE3 would be $2 trillion, approximately equal to QE1 and QE2 combined.

A team at Bank of America (NYSE: BAC) came to a similar conclusion, although the team put the ultimate total for QE3 slightly higher, at $2.2 trillion. Add that to the existing $2.8 trillion of debt on the Fed's balance sheet, and you get a grand total of $5 trillion.

While such runaway monetization could have dire consequences for the U.S. dollar, it will be jet fuel for both silver prices and gold prices. Gold has recently hovered around $1,700 an ounce, while silver is in the $35 neighborhood.

The Fed's QE programs, which started in January 2009, have helped push gold up 97% in less than four years.

It's no surprise, then, that major banks see gold prices taking off next year after the Fed accelerates QE3. 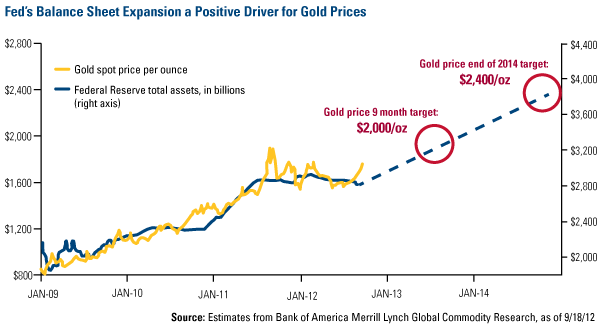 The Website ZeroHedge foresees an even greater impact from the QE3 that the FOMC meeting will unleash: gold at $3,350 by early 2015 and oil at $190 a barrel.

Looking a bit further ahead, Money Morning Global Resources Specialist Peter Krauth said the massive dose of QE3 could, by late 2016, have us "looking at $3,700 gold -- and silver may be trading at $95."

And there may be no end in sight.

"I expect lots more money printing, whose inflationary effect is always kind to silver and gold. My long-term target for gold still remains $5,000," Krauth said. "As this bull progresses, I think we'll see the gold/silver ratio move down closer to 20, which would imply that silver eventually reaches $250."

Best of all for gold, the Federal Reserve's profligate money-printing is typical of central banks around the world, undermining fiat currencies everywhere. And the less valuable fiat currencies become, the more gold, silver and oil prices will rise.

Because it's not always easy for retail investors to buy commodities like gold and silver directly, those seeking to profit from the QE3 bonanza spawned by the Dec. 12 FOMC meeting need to look at mining stocks and exchange-traded funds (ETFs).

One of the top silver mining stocks is Silver Wheaton Corp. (NYSE: SLW).

Capitalizing on QE3 by investing in oil is a bit more complicated. For more details, click here.

What happened to DEFLATION??I heard it would cause the Gold/Silver Coins and bullion to go down in value possibly to $750 per oz in Gold etc.

If FIAT currencies go down over the world how do we recover value in G&S ?

I guess that has me confused as we have inflation now.And it well go down more into 2013 .
So what do I do with any gold or silver bullion or coins now??
Sincerely Burton…Thankyou

To begin with, gold and silver could do well in deflation because there is no counterparty risk as with paper investments. Deflation means high unemployment, reduced spending so higher unemployment, debt defaults, bank failures, etc. and people might flock to gold and silver rather than have their money in something that goes bust, including a bank!

We could have inflation or deflation and it is largely a choice. I agree with Chris Martenson and others who say that we will more likely have inflation because it is more invisible and less IMMEDIATELY painful. Also, if we have deflation, unemployment will skyrocket and the stock market will crash bigtime, two visible things that the public will feel quickly, cry out against and beg the fed to "do something." It is possible we could have deflation despite the best efforts of the gubment and fed to inflate, but that is highly doubtful since the gubment could simply mail checks to everyone in any amount (Bernanke's "helicopter drop"). Also, the fed could socialize all retirements into treasuries, buying it some time from the ravages of inflation, even though it wouldn't be fair to those who saved for retirement.

Dont think I am interested in paying for the rest of the story. You guys have no idea how long TPTB can keep suppressing gold and silver. If conventional wisdom had prevailed,PM's would already be double what they are right now. Stop claiming that you know what is going to happen short term. Readers simply position yourselves with cash for the short run and PM's for the inevitable reset-When the big dogs decide when.

Just my opinion but I'd say hold onto all your bullion. If the price does crash buy more. Those central bankers won't allow the currency to deflate, they'll try to keep the ponzi going right up to the point it collapses. Money creation will be followed by more money creation and more. At some point you won't measure your wealth in dollars becuase they will be worthless you'll measure it in ounces if you are a lucky one who has any.

Let's all try to remember what the REAL value of gold is…$900 oz. That's it. Gold is high because of scared money and uneducated consumers. Deflation will force the price down closer to it's REAL value, eventually, & QE will counter act reality. Could it go up?,,Yes. Could it go down? Yes!
What's a boy to do? Well I for one will forego the whole mess and invest in REAL assets, such as MCP. China is the devil and has the power to do as it will. Force the price up on rare earths it has, will and continue to do. Look at the chart for MCP. Within 12 mo. or less we should see the same spike, as long as china does what it will, and we all know there's no stopping the devil, for he holds all the power.(atleast 95% of it). Thanks again for stickin to your guns on MCP, unscrupiulous or not, MCP is a real player in the metals market.

No one cares about QE3, operation Twist, Debt Ceiling anymore.
The new buzzwords is Fiscal Cliff, give that a couple more weeks then it will be something else; Santa Twist Cliff Debt or something.

QE 3 will drive the price of gold to double by 2015, that will be coupled with a big devalue of the dollar. any bets?

I hold a wad of silver which I now have an 80% profit on. In the end I know silver will out shine everything else. But with that said I feel in my gut that some where along that road silver and gold will get whacked. Problem is I just do not know when. Silver in the long run can do nothing but go up and that is a given. But along the way there will be ups and downs. I am getting two old to hold this amount of silver and watch the bottom drop out. Darn I got to eat. So I guess I am between a rock and a hard place. Would like to do some time selling but then again I hate to be left sitting in the dust should silver really take off.