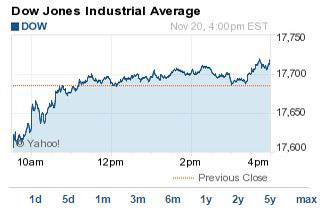 What Moved the Markets Today: The Dow Jones got a boost today from oil and manufacturing. With negative economic data battering Europe and China, energy prices helped fuel an unexpected rally. West Texas Intermediate, priced in New York, jumped roughly $1. Meanwhile, the Philly Fed Index posted 40.8 for November, its highest reading since 1993. The figure blew away analyst expectations of 18.3.