The Dow Jones today plummeted more than 100 points after coming within striking distance of the 18,000 level Friday.

Crude oil prices crashed to a new five-year low, slipping more than 4% on the day after Morgan Stanley (NYSE: MS) slashed its oil forecast through 2018. The investment bank said it expects oil prices to hit a new low in the second quarter of 2015.

The VIX, the market's volatility gauge, soared more than 19% on the day. 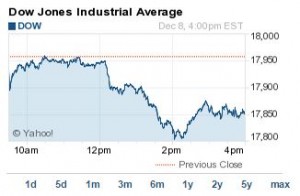 What Moved the Markets Today: The markets saw their worst one-day performance since October as the energy sector dragged down stocks and growth concerns reemerged in Japan and China. West Texas Intermediate fell more than 4% to hit $63.13, the lowest price since July 2009. Meanwhile, Brent slipped roughly 4.1% to $66.18, the lowest level since October 2009. Morgan Stanley slashed its Brent outlook by $28 to $70 per barrel for 2015. Prices continue to slide as OPEC's largest producer, Saudi Arabia, refuses to slash production to support global prices.

Now our experts share some of the most important investment moves to make based on today's market trading: