Millions of Americans are set to tune into the CNN debate on Wednesday, Sept. 16. This marks a second scrap among the GOP's hotly contested field of 2016 presidential candidates. The first GOP debate was held by FOX News on Aug. 6 and drew 24 million viewers - making it the highest-rated primary debate in television history.

Just like in that instance, the CNN debate features both "undercard" and "prime-time" debates.

Here are the candidate lists and when to watch...

An "undercard" debate will be held at 6 p.m. and includes the four candidates who failed to reach top 10 in the polls:

The "prime-time" CNN debate kicks off at 8 p.m. It features the 11 top candidates:

Why is there a "plus one" to the top ten candidate field featured during prime time?

The Republican National Committee (RNC) and CNN were forced to change their debate rules after a recent, significant shift in the polls...

CNN Debate Preview: The Poll Data (and the Fiorina Phenomenon) 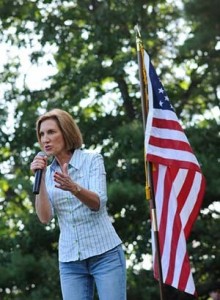 CNN selected its top 10 candidate field for the prime-time slot by averaging the results of polls taken between July 16 and Sept. 10.

Enter Carly Fiorina - the 11th candidate. The former Hewlett-Packard Co. (NYSE: HPQ) boss scraped her way into the main event after a stellar performance in the "undercard" FOX News debate on Aug. 6. Since then, she has surged in the polls.

Originally, eight out of the 10 polls CNN averaged to determine the GOP's top 10 were conducted before the first debate, which put Fiorina out of the top 10. Fiorina's camp argued CNN should weigh recent polls more heavily than older ones - and it worked.

The rules for inclusion were amended in late August such that any candidate who made the top 10 in an average of polls conducted after the FOX News debate would be allowed to debate in the later time slot. Fiorina is the only candidate to move from the bottom six to the top 10 in the post-debate average.

Here's a look at the averages for qualifying polls conducted after the Aug. 6 debate through Sept. 10:

CNN Debate Preview: What Everyone's Talking About Going In

After Wednesday, the next GOP debate will be held on Oct. 28 on CNBC. Candidates will be determined based upon updated poll numbers.

The Politics Behind $250 Million: Super PAC campaign contributions for the 2016 presidential race totaled a whopping $250 million by through the end of August. Here's how much cash each candidate has raked in...