For Feb. 3, 2016, here's the top stock market news and stocks to watch based on today's market moves… 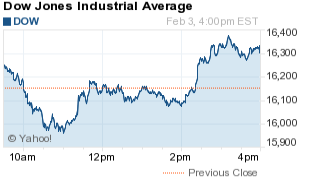 The Dow Jones Industrial Average today (Wednesday) added more than 183 points as oil prices rocketed higher and private payroll figures indicated the U.S. jobs market continues to steam along. The Nasdaq slipped 11 points as tech stocks underperformed on the day. Shares of Amazon.com Inc. (Nasdaq: AMZN) were off 3.8%, while shares of Alphabet Inc. (Nasdaq: GOOGL) were off more than 4%.

On the economic front, ADP reported that private U.S. payrolls surged by 205,000 in January. That figure beat consensus estimates of 195,000. Meanwhile, gold prices today rose to three-month highs after a weaker than expected U.S. ISM non-manufacturing report had investors piling into gold. Data from the Institute for Supply Management showed U.S. service-sector growth slowed more than forecast in January. And Wednesday's read was the lowest for the sector since February 2014.

Despite today's gains, many investors still fear we're headed for a stock market crash, correction, or bear market. Here's what our team of Money Morning experts predict will happen in 2016…