Garrett Baldwin
With 2016 representing the ongoing rise of organic corporate growth, firms are relying more and more on mergers and acquisitions to capture market share. Monday was another one of those days in which the phenomenon ran wild. Despite the continued shift from sector oligarchies to duopolies or worse, the Dow Jones Industrial Average gained only 21 points. Shares of both Chevron Corp. (NYSE: CVX) and Goldman Sachs Group Inc. (NYSE: GS) were the biggest laggards on the Dow, while healthcare stocks pushed the market higher. 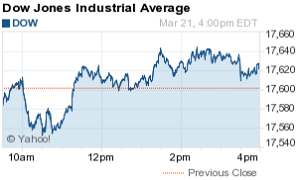 Richmond Federal Reserve Bank President Jeffrey Lacker and Atlanta Federal Reserve Bank President Dennis Lockhart both offered speeches today on the state of the U.S. economy. Lacker said he was confident that inflation was on pace to hit its 2% target but did not offer insight into whether the U.S. central bank should raise interest rates this year. Meanwhile, Lockhart argued the U.S. economy could justify an interest rate hike as soon as April. Once again, the markets are confused by sentiment of Federal Reserve members. It was chatter like this that had Money Morning Capital Wave Strategist Shah Gilani looking at the recent market rally and sharing with readers why things are starting to resemble the pattern of what happened to the Dow Jones Industrial Average in 2008. Read his warning, right here.

Oil prices rose in a choppy day of commodity trading. WTI futures for April delivery – which expired today – gained 1.2% to $39.91, while Brent futures for May added 0.8% to close at $41.54. Traders are keeping a close eye on the status of an upcoming meeting of global exporters representing 73% of the global oil trade. In the United States, new data suggests an uptick in domestic production, albeit a small one. Baker Hughes Inc. (NYSE: BHI) said the nation added one rig last week following 12 straight weeks of declines. Over the last year, U.S. oil rigs have declined by roughly 66% as falling oil prices fail to justify output.

On the economic front, existing U.S. home sales cratered in February. Economists and analysts suggest this is a possible concern for the American economy after sales fell 7.1% to its lowest level since November. However, it should be noted that a shortage of inventory exists at the same time that rising prices are keeping some buyers out of the housing market. Here's the issue in a nutshell: There are plenty of low-price, low-quality properties, but high quality is in low quantity, and these properties cost a premium in today's market.

But the big talk today was another flurry of mergers, headlined by a deal to create a monster of a hotel company.

Following a huge bid by China's Anbang Insurance for Starwood Hotels & Resorts Worldwide Inc. (NYSE: HOT), Marriott International Inc. (Nasdaq: MAR) increased its bid and secured a deal to purchase its rival. The newly sweetened cash and stock deal is worth $13.6 billion. HOT stock jumped 4.5% on the news, while MAR shares were off 1.2%.