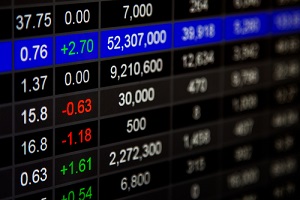 The Dow Jones Industrial Average was back on the rise this afternoon, fueled by a strong performance by telecom stocks.

The Dow has come a long way since British voters decided to depart the European Union, a catalyst that sent the index off more than 800 points in two sessions. Since then, record low interest rates and falling bond prices have pushed investors into the markets. As our Capital Wave Strategist Shah Gilani explains, the S&P 500 is trading at nosebleed valuations.

But the market conditions are ripe for easy profits.

Today was another wild day on Wall Street, and investors might have missed several profit opportunities if they weren't paying attention. We'll get to them in a moment.

DJIA Today: Dow Rallies Despite Another Down Day for Crude Oil

The Dow Jones added over 53 points today, pushing the markets back toward record territory.

The markets remained resilient despite a mass shooting in Munich, Germany. An armed assailant opened fire in a mall in Germany's third most populated city. Details about the shooter have not been released. However, the violence is a reminder that war, terrorism, and ugliness are serious problems that are not going away for the global markets. Unfortunately, it's becoming a growth industry. Money Morning Chief Investment Strategist Keith Fitz-Gerald offers his insight on what this trend means for the markets.

Traders have largely forgotten that the U.S. Federal Reserve will meet next week to discuss monetary policy. Fed officials say they want to hike interest rates two more times this year. However, the markets see very low odds over the next six months of such an event. In fact, Morgan Stanley (NYSE: MS) doesn't expect a rate hike until 2018. The Fed being unable to raise rates is just one of the reasons we could still see a stock market crash this year.

It was a mixed day for airline stocks after Southwest Airlines Co. (NYSE: LUV) reported a weak outlook on Thursday. Shares of American Airlines Group Inc. (NYSE: AAL) beat Wall Street top and bottom line expectations. However, the iconic airline plunged 44% from the same period last year. Shares of LUV stock were up 1.2% on the day despite news that the company received a downgrade from Buckingham Research.

Trending: You can give your portfolio a 326% performance advantage.

Gold prices and silver prices both declined this afternoon as markets kept pushing toward record highs. Gold and silver both dipped 0.6%. That said, we're still seeing double-digit gains for silver this year. Go here for our latest silver price forecast for 2016.

Oil prices slid on Friday as traders worried about a potential glut fueled by increased Iraqi exports. WTI crude was off 1.2%, while Brent crude slipped 1.3%. This afternoon, Baker Hughes Inc. (NYSE: BHI) reported that the U.S. rig count increased for the fourth consecutive week. This week, the nation saw 14 rigs added, bringing the country to 371 rigs.

While many believe that WTI crude is on its way to $40 in the short term, a growing consensus expects oil prices to push much higher this year. That consensus echoes the insight of our Global Energy Strategist Dr. Kent Moors. As Kent explains, this slight downturn is creating a terrific medium-term profit opportunity for savvy investors who start setting their positions right now. Click here for Kent's insight.