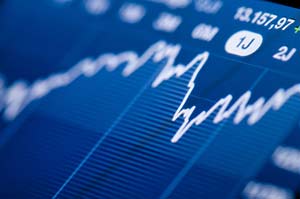 The Dow Jones Industrial Average today snapped a seven-day losing streak thanks to a sharp uptick in oil prices and a rise in financial stocks.

The Dow Jones added 41 points on Wednesday, fueled by a surprise rally in oil prices, stronger than expected earnings reports, and increasing optimism for a 2016 rate hike.

Oil prices rallied today on news that the United States experienced a much larger drawdown in gasoline inventories than analysts had anticipated. The uptick follows Tuesday's sharp decline where oil fell below $40 per barrel for the first time since April.

WTI crude prices added 3.7% today, while Brent crude slipped 3.5%. Those gains came despite news that the U.S. Energy Information Administration reported a surprise increase in crude inventories last week. The increase reignites some concerns about a global glut, even with prices hovering near $40 per barrel.

Shares of Chevron Corp. (NYSE: CVX) added 0.8%, while Exxon Mobil Corp. (NYSE: XOM) added 0.3%. Despite the recent downturn in oil prices, there is one fund that is a screaming buy.

It's been an interesting quarter of earnings reports. So far, 71% of companies beating their earnings forecasts sounds great. But Money Morning Chief Investment Strategist Keith Fitz-Gerald explains that earnings expectations are comically low right now. He says there is one reason for cautious optimism next quarter. Here's what Fitz-Gerald told FOX Business this morning, including the impact of economic growth on the markets today.

The Federal Reserve was back in focus today after Chicago Federal Reserve President Charles Evans said that the central bank could be ready for one rate hike in 2016. Increased chatter and hopes for a rate hike were a boon for insurance and financial stocks. It's important to note, however, that Evans considers inflation levels far below where it needs to be.

Shares of JPMorgan Chase & Co. (NYSE: JPM), Citigroup Inc. (NYSE: C), and Bank of America Corp. (NYSE: BAC) all ticked up more than 1.5%. The biggest boost on the Dow was Goldman Sachs Group Inc. (NYSE: GS), which gained more than 1.6% despite news that the Federal Reserve has fined the bank more than $36 million for using confidential data.

Still, the Federal Reserve isn't taking action yet. Up first, the central bank awaits Friday's report on the health of the U.S. jobs markets. Consensus expectations call for an increase of 185,000 jobs created in July. That's down a large amount from the 287,000 created in June.

On the political front, the Republican Party is in complete disarray. With GOP candidate Donald Trump refusing to endorse Rep. Paul Ryan (R-WI) or Sen. John McCain (R-AZ), the party's leadership is scrambling. The Republican National Committee is reportedly weighing its options in the event that GOP presidential nominee Donald Trump drops out of the election. But is Trump dropping out of the race?