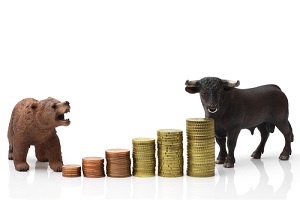 Right now, investors are looking for the best strategies to profit in a volatile market. But one of the most interesting and exciting is the method developed by Money Morning guru Tom Gentile.

Now let's look at the most important market events and stocks to watch today, plus your economic calendar, for Oct. 11, 2016.

The Dow Jones Industrial Average projected a 39-point decline as investors eyed a busy day of earnings reports and fluctuating crude oil prices. Investors will continue to debate the timing of the next interest rate hike by the Federal Reserve. Though the markets largely anticipate a rate hike in December, some skepticism has risen after last week's weaker than expected jobs report. The U.S. economy added 156,000 jobs in September, although economists had anticipated more.

Trending: This Chart's Shape Shows Where Markets Will Go Next

Oil prices were sliding off a four-month high as traders continue to be skeptical about OPEC's November production deal. Money Morning Global Energy Strategist Dr. Kent Moors has called OPEC's deal a game-changer. Moors explains what's next for oil prices and what investors must know about global production.

The big story this morning is happening at Samsung Electronics Co. Ltd. (OTCMKTS: SSNLF). The company announced that it will no longer produce the Galaxy Note 7 smartphone. The technology giant has halted production due to ongoing safety concerns, according The Wall Street Journal. Shares of SSNLF were not moving in pre-market hours, but the Korean-listed shares were off more than 7.5% today. Shares of Apple Inc. (Nasdaq: AAPL), the firm's chief competitor, added 1.2% in pre-market hours.