Microsoft Corp's (Nasdaq: MSFT) earnings per share of $0.76 easily outpaced the analyst forecast for $0.68. Revenue was $22.33 billion, which topped expectations for sales of $21.71 billion.

Revenue from Office commercial products rose 5%, with the cloud-based Office 365 seeing growth of 51%.

This quarter's MSFT earnings are likely to please investors, with strong numbers again expected from its growing cloud businesses.

Microsoft Corp.  is scheduled to report its 2017 Q1 earnings today (Thursday) after the market close.

Wall Street is looking for MSFT earnings per share of $0.68, a slight increase from the $0.67 per share from the same quarter one year ago. The forecast for revenue is $21.71 billion, also slightly higher than last year's $21.66 billion.

A strong beat in the Q1 Microsoft earnings is a definite possibility. In the last quarter, Microsoft beat earnings expectations by 19%, propelling MSFT stock to gains of more than 9% over the following three weeks.

And the primary force that drove MSFT earnings the last time around – its growing cloud business – will play a prominent role again.

In the Q4 earnings in July, Microsoft's Azure cloud business grew 102%, with commercial revenue from Office 365 growing 54%. That was no anomaly. The annualized run rate of Microsoft's cloud revenue has nearly tripled since 2014. 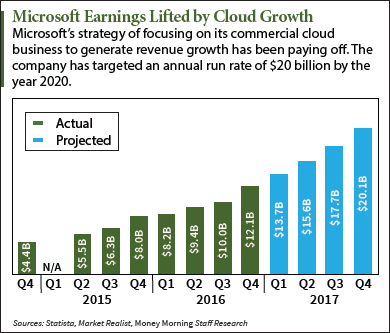 Wall Street will be watching those businesses closely to see if the positive momentum from last quarter's MSFT earnings continues this quarter.

Based on anecdotal evidence, the odds are good that it will…

Why the Q1 MSFT Earnings Are Likely to Beat Expectations

Meanwhile, Microsoft's Personal Computing segment, which includes the Windows, Surface, and Xbox businesses, is expected to hold its own.

Windows sales, of course, have been hit in recent years by the decline in PC sales. But lower numbers here don't hurt like they used to, as Windows revenue has shrunk to just 10% of the company's total now.

If the Q1 MSFT earnings overall deliver as expected, Microsoft stock will enjoy a pop as it did in July. Although the price-to-earnings ratio is on the high side – 27.38 – MSFT is only up 3.75% year to date.

But whatever we see in the Q1 Microsoft earnings, investors need to bear in mind that this company is a long-term play…

Why Microsoft Stock Is a Buy Regardless of One Earnings Report

Under CEO Satya Nadella, Microsoft has made great progress in its transition away from the stagnant desktop-based businesses that built the company, Windows and Office, to new-growth, cloud-based businesses.

Next Up: Why the Microsoft Dividend Alone Is Reason Enough to Buy the Stock