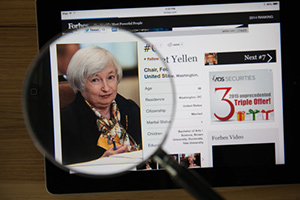 During testimony before Congress, Yellen said the central bank was adjusting its economic outlook as President-elect Donald Trump prepares to take office. According to CME Group's FedWatch Tool, the probability of a rate hike now sits well north of 90%.

Let's look at the final numbers for Thursday for the Dow, S&P 500, and Nasdaq:

The Dow Jones added 35 points on Thursday thanks to a strong surge in financial stocks. Shares of Wells Fargo & Co. (NYSE: WFC) and Bank of America Corp. (NYSE: BAC) both gained roughly 2% after Yellen hinted that the central bank will likely raise rates in the near future. The markets also benefited from positive economic data and signs that U.S. labor markets are tightening. Last week, the number of Americans seeking unemployment benefits fell to a 43-year low.

Trending Story: How Small Investors Can Take on Wall Street... and Win

The price of crude oil slipped in the afternoon despite increased optimism that OPEC members will formalize a deal to cap global production. This morning, Saudi Energy Minister Khalid al-Falih expressed optimism that the global oil cartel will continue to make progress ahead of its Nov. 30 meeting in Vienna, Austria.

But the big news today was the testimony of Federal Reserve Chair Janet Yellen. During testimony on Thursday, Yellen said that she has no plans to step down when Donald Trump becomes POTUS and will finish her term as the central bank's chairperson through 2018. Even if Trump decides to remove her from the top position at the Federal Reserve, Yellen still can serve as a governor until the end of her 14-year term, which concludes in 2024. During her testimony, Yellen stressed the importance of a central bank's political independence to global markets.

But the most interesting part of the testimony came when Yellen spoke about business investment in the United States. When pressed to explain why business investment remains low, Yellen said she was not sure, but argued that it was not due to the central bank's cheap-money policies.