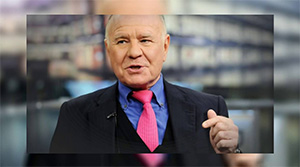 But only in the short term...

As far as long-term economic growth is concerned, Faber believes the soon-to-be-POTUS' financial ideas won't be enough to save the stock market.

For his part, Trump has proposed several economic policy changes over the past year:

These types of initiatives exhibit Trump's "pro-business" sentiment, Faber added. "It's natural that the mood has improved among the small businessman, corporations, and investors."

And Faber expects equities to keep rising... but only to fall again.

And that inevitable plummet later on, he warned, will "not be very friendly" to investors.

The infamous "perma-bear" then explained his reasoning...

You see, as far as Faber is concerned, U.S. asset prices are already grossly inflated - meaning, before long, they won't have any more room to expand.

He expects that the economy will eventually stall out because of this lack of growth, leaving only room for deficits to rise.

This event, Faber claimed, will see Trump "begging the Fed to launch QE4," which will cause the dollar to weaken and "precious metals to go ballistic."

Don't Miss: Trump Will Actually Be Good for Gold - Here's Why

Reminder: Quantitative easing occurred when the U.S. Federal Reserve started aggressively expanding its balance sheet shortly after the global financial crash of 2008. After a short break, the Fed started a second QE round in 2010 before launching its third open-ended $85 billion-a-month program in late 2012.

But a return to quantitative easing could see the Fed "overshooting its mark" if it doesn't time its financial injection to the market correctly. Too much money in the economy causes severe inflation - an issue for which the Fed is likewise not prepared. Inflation is already on the rise since the central bank's decision to raise interest rates last month. Accelerated inflation could cause a stock market crash because no one buys products they can't afford.

Faber pointed out there is the potential for profit, however, ahead of the stock market's eventual crash...

"If someone wants to be in the market," Faber said, "and I always have part of my assets in equities, then I think other markets than the U.S. are more attractive."

Chiefly, emerging markets have the most profit potential right now, according to Faber.

An "emerging market" is a developing country whose economy is in a fast growth cycle. It has some characteristics of a "developed" market, but doesn't meet the standards of a developed market just yet.

Faber noted this morning that in 2017, Argentina, Brazil, and the emerging-markets ETF are already outpacing the S&P 500.

These markets used to be a somewhat obscure niche of the international investing world.

But they're not anymore.

In fact, the United States and European Union have barely managed to grind out 3% yearly economic growth for a decade now.

But elsewhere in the world, in the emerging markets, growth routinely tops 7% a year - which means there are plenty of potential profit opportunities to be enjoyed, like the six we highlight for investors here...