The United States has been officially warned of a potential "large-scale war" if it blocks China from accessing the islands it's been building in the South China Sea. 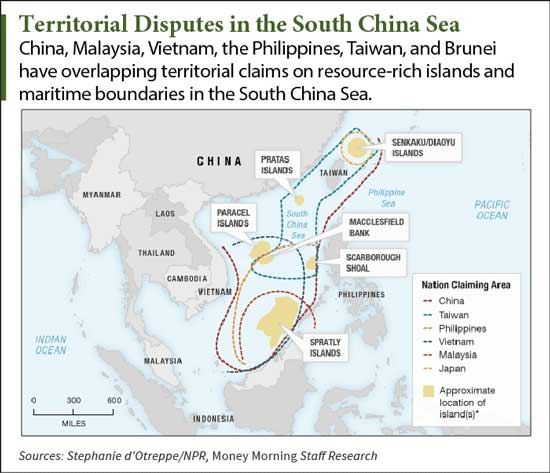 That was when Tillerson told U.S. senators that he would seek to deny Beijing access to its artificial islands. The man-made archipelago in question appears to house anti-aircraft and anti-missile systems.

The former Exxon Mobil Corp. (NYSE: XOM) CEO justified his suggestion by comparing China's actions in the region to that of Russia's in Crimea.

These statements did not bode well with the media in Beijing...

Beijing: Large-Scale War Is the Only Other Alternative

China's Global Times warned overnight that any intervention from the U.S. in the South China Sea would lead to "a large-scale war."

"Unless Washington plans to wage a large-scale war in the South China Sea, any other approaches to prevent Chinese access to the islands will be foolish," the media site claimed in an editorial.

Don't Miss: For all the complicated stuff going on in the world, it's actually a pretty simple place when it comes to investing your money...

The state-run newspaper China Daily focused its attention more on Tillerson himself, suggesting that his remarks showed ignorance of Sino-U.S. relations and diplomacy in general. "Such remarks are not worth taking seriously because they are a mish-mash of naivety, shortsightedness, worn-out prejudices, and unrealistic political fantasies," it wrote.

China's official response, however, from foreign ministry spokesman Lu Kang was a bit more muted. He simply said that China had the right to conduct "normal activities" in its own territory.

This is the second warning from Beijing media this week.

If China is stupid enough to engage in a full scale war, there won't be anything left to dispute on after an all out mutually afflicted destruction caused by atomic bombs. Maybe it would be better if both sides find a common ground for economic growth, rather than indulging in childish behaviour. Let's hope the Chinese and American businessmen can agree on something else than letting their respectful governments act like kids.

Well put, realities are the nuclear option is no option if one wants territories to settle, mine etc. Diplomacy will win out, the new toys of both navies will be showcased as a show of strength but in the end diplomacy and cooler heads will win out.

What hubris by the us it is China's sphere of influence not ours. Most of the problems in the world r because we stick our nose in every other countries business.

Economic developments and cooperation is better than confrontation. Peace is important for World economy further development.

All we have to do is blow up the isles. Pick your way, but it doesn't require an A-bomb when Daisy Cutters and cruise misses will do it. Subs do the rest. Take your pick, China, unless you can walk on water. The only real risk here is economic–lost investment, and that is significant.

War is inevitable. The history of man tells us so. China is the red dragon and the red dragon is Satan who is now extremely restless and busy promoting violence, murder, drugs and so on to destroy man. Those who are naive or has no idea whatsoever of who God is and who Satan is, or who are simply atheistic will not believe this line. We are already inside the 7-year tribulation period. How far inside I do not know and cannot guess. The worst is still to come after ISIS, after Russia's intervention in the ME, after the war between Sunni and Shia Muslims and after the almost universal contempt on the Ten Commandments of God. Israel and no other is the catalyst of the third world war.

China's building of artificial islands in, and claiming for itself that part of the South China Sea is bad policy, and has already been declared illegal in International Court. Any attempt to challenge the USA militarily to continue this policy would be an unfortunate miscalculation on their part, and would risk decades of economic progress they earned and enjoy, by cooperating economically with other nations. Let's hope cooler heads there will prevail.