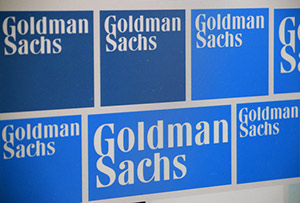 In Dow Jones news today, the Dow was only slightly up and didn't get much closer to 21,000.

The markets are growing more cautious on the notion that President Donald Trump's administration may take much longer to cut taxes, offer financial reform, and repeal "Obamacare."

Despite the lack of optimism today, volatility continues to be muted. The CBOE Volatility Index (VIX) fell over 3% and remained below 12. The VIX is viewed as the markets' fear gauge.

Banking stocks weighed on the Dow and the S&P 500 throughout the day. Shares of Goldman Sachs Group Inc. (NYSE: GS) fell 1.5% after the company received a downgrade to "Sell" from investment firm Berenberg.

And because the market is moving on optimism rather than fundamentals, investors are asking, "Will the stock market crash soon?" Money Morning Global Credit Strategist Michael Lewitt has a recommendation on what you should do to protect yourself from growing uncertainty in the markets. Click here to find out more.

Energy stocks slumped thanks to another downturn in crude oil prices.

Oil prices were falling after Baker Hughes Inc. (NYSE: BHI) announced the weekly U.S. rig count surged past 600 platforms for the first time since late 2015. It's another sign that higher crude prices have fueled an uptick in U.S. production. On Thursday, the Energy Information Administration announced that domestic crude stocks increased by 564,000 barrels.

This uptick in production is outweighing news that OPEC members and Russia are on the verge of surpassing production cuts. The nations have reached 90% compliance on a deal to cut 1.8 million barrels from daily production.

We expect gold to keep rising by the end of the year. While there are many doubters about gold's pending rally, Money Morning Resource Specialist Peter Krauth explains one major "Donald Trump factor" that is going to propel the precious metal higher. Here's how to get started making a profit on gold's coming surge.

But the big story is the Trump administration focusing on marijuana enforcement across the United States.

On Thursday, White House press secretary Sean Spicer hinted that the administration could begin cracking down on recreational marijuana and legalization efforts. In fact, President Trump's new attorney general, Jeff Sessions, has criticized the nation's growing marijuana industry. Investors who have made a lot of money in recent years in this industry are understandably nervous and want to know how Trump could derail the business.

Money Morning dug into the federal rules to understand the two major ways that Trump could become a major thorn in the side of marijuana businesses.

This Stock Is About to Skyrocket: This tiny $5 company just passed each of the seven benchmarks in this secret stock-picking method. Learn how to get in before its revenue surges an estimated 4,709%. Read more...