Anyone who follows Bitcoin knows how it has a history of dramatic price swings.

But that history, when translated to a logarithmic Bitcoin price prediction chart, shows that over the long term, the price of Bitcoin has followed a distinct pattern as it has moved higher. 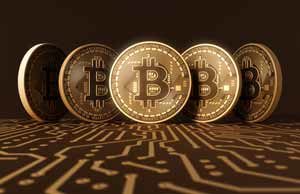 Related: Open Letter to the SEC: It's Time to Approve a Bitcoin ETF

And that suggests several more steep jumps lie ahead for the preeminent cryptocurrency that will push BTC not only past its all-time high of just under $20,000, but far beyond it, past $50,000 in the near term and ultimately to $250,000 or even $1 million.

Prateek Goorha, an interdisciplinary social scientist with an interest in the economics of innovation and creativity, has written two blog posts analyzing the phenomenon, which he calls the "parabolic supertrend" in Bitcoin.

The basic idea is that each major Bitcoin price jump has come as the result of three distinct phases....

What Bacteria Can Teach Us about Bitcoin Price Moves

It turns out that Bitcoin's price behaves a lot like bacteria.

Each major price move has included a phase of stasis, an exponential phase of rapid growth, and a phase of decline. These cycles have driven the price of one bitcoin from mere pennies in 2010 to thousands of dollars.

In that context, the recent 70% decline isn't as ominous as it might seem. This chart, first created by an internet crypto technical analyst who goes by "Parabolic Trav," does a good job of showing how Bitcoin's periodic sharp declines haven't broken the overall pattern of parabolically higher prices. 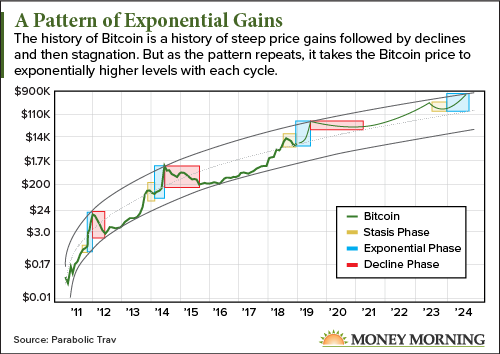 The gains may not look dramatic at first glance, but this chart uses a logarithmic scale rather than a linear scale. So what you're seeing are percentage gains.

Goorha's posts on Medium likens what's happening to the life cycle of bacteria in a Petri dish.

During the stagnation phase, he says, the bacteria are "acclimatizing to the environment," resulting in "little to no growth." That's followed by an exponential phase in which the bacteria "begin propagating by cell doubling" as they channel the available resources into growth.

In the third phase, as resources are exhausted, there's a decline in the bacteria population.

When applied to Bitcoin, the community of users is comparable to the Petri dish, with the fiat money invested (be they U.S. dollars, Japanese yen, euros, or South Korean won) the resource feeding growth.

Periods of selling starve the system of resources and result in a decline. Eventually the decline stops as the Bitcoin market adapts to these circumstances. The next phase is triggered when Bitcoin's "Petri dish" - the number of users - gets bigger, introducing fresh resources to the system.

So while Bitcoin has experienced several periods of steep decline, the arrival of the next cycle prevents the price from falling to levels seen in previous cycles.

That brings us to the present. What can the parabolic Bitcoin price chart tell us about 2018's disappointing performance? And what does it forecast for the years ahead?

This remarkable ride is far from over...