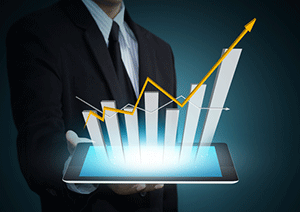 This morning, the Dow Jones Industrial Average was rising sharply after the Federal Bureau of Investigation announced that it had cleared Democratic nominee Hillary Clinton of any wrongdoing tied to new emails discovered in a different investigation.

With the announcement, the markets are looking to end their longest daily skid since 1980.

On Friday, the Dow Jones fell 42 points as the 2016 election looms. The markets are pricing in a Clinton victory, but they're also anticipating that Congress will remain split. Investors also weighed statements from members of the Federal Reserve after the central bank decided not to raise interest rates last week.

Today, Money Morning Technical Trading Specialist D.R. Barton breaks down the latest speculation about the election and what investment opportunities are forming.

The Dow Jones Industrial Average projected a 231-point gain as Wall Street took a breath after the FBI's announcement to not charge Hillary Clinton over her email issues. With the election looming, the markets anticipate a Clinton victory, but anything could happen. According to a CNBC Fed Survey released this morning, 46% of investors want Hillary Clinton to win, compared to 23% for Donald Trump.

Despite the uptick, there will be losers in today's session. Keep an eye on biotech stocks and iShares NASDAQ Biotechnology Index (ETF) (Nasdaq: IBB), which tracks the performance of the broader sector. During her year-long campaign, Clinton has criticized biotech companies over rising drug prices and reduced research and development spending. Last night's announcement favoring Clinton could spark a sell-off of biotech stocks.

The key biotech stocks to watch are Biogen Inc. (Nasdaq: BIIB), Gilead Sciences Inc. (Nasdaq: GILD), and Amgen Inc. (Nasdaq: AMGN). Although the IBB ETF holds 181 stocks, the three listed equities comprise 24.88% of the fund. It could be a rough day in the sector.

The price of crude oil today is pushing higher this morning after the secretary general of OPEC announced that the global oil cartel was committed to the global output deal signed by members in September. Concerns about the deal have accelerated in recent weeks due to geopolitical tensions between Saudi Arabia and demands for an exemption by Iraq.

Must See: Get Our Bold 2017 Oil Price Forecast -- Plus Today's Most Profitable Energy Play...

The big story today is the 2016 election. But it's not just the main event between Trump and Clinton that has investors talking. There are many important congressional and Senate races that have drawn a lot of attention. There are also important statewide votes on recreational and medicinal marijuana legalization on Nov. 8. Perhaps the biggest will take place in Massachusetts, where recreational marijuana could receive full-scale legalization. Here's what a "Yes" vote would mean for Question 4.