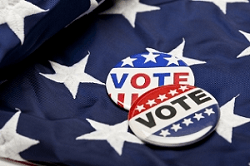 This morning, stock market futures indicate a 100-point rise from yesterday's close on news that the Republican Party will control both chambers of Congress in 2015. The GOP picked up at least seven Senate seats during Tuesday's election, with the opportunity to snag an additional three in the coming weeks in Alaska, Louisiana, and Virginia. The party also shocked political pundits by winning a swath of gubernatorial elections, including the top executive spots in deep-blue states like Illinois, Maryland, and Massachusetts. The GOP is also likely to gain 14 to 18 seats in the House of Representatives. For a recap of what happens to stock markets after midterm elections, be sure to click right here.

Today, watch for the market's reaction to the ADP National Employment Report, which provides the first glimpse of job creation in the month of October. Consensus estimates call for the U.S. economy to have added 230,000 private sector jobs last month. A busy day of economic data and earnings reports also includes third-quarter results from electric vehicle giant Tesla Motors Co. (Nasdaq: TSLA) after the bell.

Here's what else you should know - including our Money Morning "Tip of the Day" - in stock market news today:

Tip of the Day: With the end of the Federal Reserve's massive quantitative easing program, many investors are worried about the future of U.S. monetary policy. As Peter Krauth explains, the central bank's grip on managing interest rates is weakening, prompting many to worry about what happens when the jolt comes. But if you're worried about what happens when rates start to increase, there is one step you can take to avoid crisis in your portfolio.