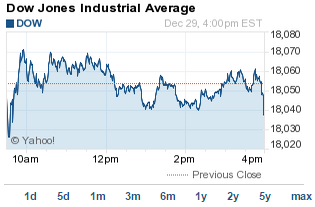 DJIA Today: The Dow Jones Industrial Average fell 15.5 points on Monday, as markets reacted to falling energy prices and renewed geopolitical concerns about the debt situation in the nation of Greece. Despite oil prices rising this morning over Libyan supply problems, prices fell sharply in the afternoon. This dragged the energy sector down in the process.

What Moved the Markets Today: The Dow Jones today fell slightly as oil prices reversed sharply from this morning's jump. A fire in Libya's largest export facility destroyed two days of the nation's production. However, the markets shrugged off supply concerns and priced tumbled during the session. Today, WTI oil fell roughly 2% to $53.64 per barrel for February delivery. Brent oil was down 1.5% to $57.94 in afternoon trading. Meanwhile, a snap election in Greece is likely as the nation's parliament rejected the government's presidential candidate. This has spurred concerns that the leftist Syriza party could rise to power. The faction aims to eliminate most of the nation's debt and cancel terms of the nation's bailout from the European Union and International Monetary Fund. The National Bank of Greece (NYSE ADR: NBG) slipped more than 8.5% on the day.

18171 Reads
These 3 High-Yield REITs Pay 8%, 10%, and 12% Dividends
REITs produce gobs of cash from rent and other fees generated from properties including office buildings, storage units, multifamily units, and more.