For May 11, 2015, here's how the stock market did today, earnings reports, the top stock market news, and stocks to watch based on today's market moves... 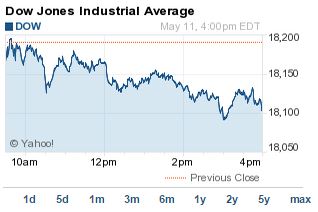 The Dow Jones Industrial Average today slipped 85 points on renewed concerns over Greece's debt problems and a downturn in the Chinese economy. In addition, falling oil prices weighed down the energy sector this afternoon.