For May 27, 2015, here's how the U.S. stock market did today, earnings reports, the top stock market news, and stocks to watch based on today's market moves... 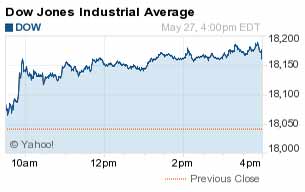 The DJIA Index rebounded from yesterday's steep sell-off, pushing higher from improved economic data at home and moves by Europe to abate concerns over Greece's pending debt payment to the International Monetary Fund. The DJIA added 121 points, while the Nasdaq gained 73 points.

Don't get embarrassed by not knowing what's going on in the markets - stay informed by following us on Twitter @moneymorning.