For July 21, 2015, here's how the Dow Jones Industrial Average did today, plus the top stock market news, and stocks to watch based on today's market moves… 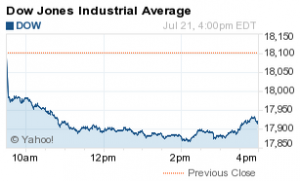 The DJIA today fell nearly 1%, or 180 points, as revenue figures from large caps International Business Machines Corp. (NYSE: IBM) and United Technologies Corp. (NYSE: UTX) pulled down the index. The two stocks accounted for more than 100 points combined in the decline on the day. IBM shares slumped more than 6.2% on news that the company's revenue slipped for the 13th straight quarter. Meanwhile, United Technologies shares fell more than 7% after the company slashed its 2015 profit outlook.