For Sept. 24, 2015, here's how the Dow Jones Industrial Average did today, earnings reports, the top stock market news, and stocks to watch based on today's market moves… 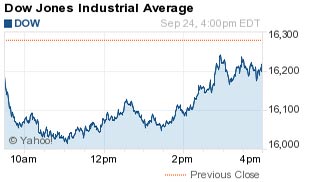 The Dow Jones Industrial Average today (Thursday) fell 78 points ahead of a speech by U.S. Federal Reserve Chairwoman Janet Yellen tonight on inflation. Investors are anxious to look for clues on when the Federal Reserve may hike interest rates after the central bank cited concerns about global growth as a primary reason for not tightening monetary policy last week. For more on what to look for during the speech, go here.

This morning, a report indicated U.S. companies reduced investment plans in the month of August, while the number of Americans seeking jobless benefits increased marginally. Despite ongoing economic growth concerns around the globe, the U.S. economy has been largely resilient to negative forces.