For Nov. 18, 2015, here's the top stock market news and stocks to watch based on today's market moves… 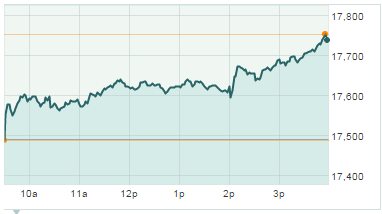 The Dow Jones Industrial Average today (Wednesday) surged 247 points following the release of minutes from the October 2015 FOMC meeting. The U.S. Federal Reserve's minutes suggested many of its officials are encouraging an interest rate hike in December, despite concerns about the nation's long-term economic potential. CME FedWatch suggests there is a 67.8% chance the central bank will raise interest rates at its next meeting on monetary policy.

The Dow Jones received its biggest boost from Apple Inc. (Nasdaq: AAPL). Shares of the tech giant surged 3.2% on news the company joined Goldman Sachs Group Inc.'s (NYSE: GS) Conviction Buy List with a price target set at $163 per share. That represents a 40% premium from yesterday's closing price. Goldman says it believes Apple will center its focus in 2016 on growth in the tech sector. However, beware Goldman's Conviction Buy List. Even though Money Morning expects Apple stock to hit $200, here's why we do not trust this "Golden" list, and neither should you.