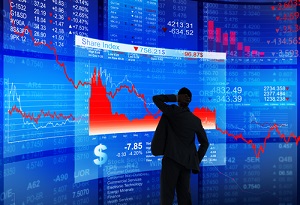 The Dow Jones Industrial Average rallied more than 133 points after global markets cheered Hillary Clinton's performance in the presidential debate last night. The markets largely ignored news that the World Trade Organization slashed its global growth forecast to a shockingly dismal 1.7%. That was a sharp fall from the 2.8% projection in April.

Despite all of the global stimulus, the large surge in international debt, and negative interest rates around the world, the world is on the brink of a recession.

Speaking of the debate, Ford Motor Co. (NYSE: F) pushed back against Trump's claims last night that the car manufacturer has been shifting its production plants to Mexico. Employees have been posting Twitter Inc. (NYSE: TWTR) and Facebook Inc. (Nasdaq: FB) comments linking to statistics about the company's hiring trends and investment in the United States. The firm says it has invested $12 billion into U.S. production facilities and created roughly 28,000 jobs.

Gold prices were sliding after the debate. But don't expect gold prices and gold stocks to continue to fall in 2016. Gold stocks have been one of the stellar market outperformers in 2016, and it is not too late to shop for some top gold stocks.

The price of crude oil today collapsed after Iran rejected Saudi Arabia's offer to limit its production output. Money Morning Global Energy Strategist Dr. Kent Moors has said for weeks that this deal was doomed from the start. In fact, Kent argues this week's meeting is about much more than oil prices. Here's the truth about OPEC's strategy…

Here's everything you need to know about the September OPEC meeting.

While everyone was focused on last night's debate, speculation about the U.S. Federal Reserve has faded to the back pages of the mainstream publications. But the Fed remains firmly at the wheel, steering the markets and speculators. Last week, the Fed said no to an interest rate hike in September. Keep in mind that the Fed still wants at least one rate hike before the end of the year. Here's how you should invest after the Fed's next interest rate hike.