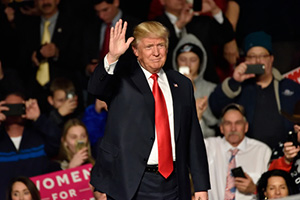 Today's stock market news will be dominated by President Trump's speech to a joint session of Congress tonight.

The Dow was flat in pre-market hours as investors take a wait-and-see approach with President Trump's latest policy proposals. President Trump will likely outline his plans for tax reform and deregulation tonight.

On Monday, the Dow added 15 points and continued its streak of 12 straight record closing highs. The defense sector led the way after Trump made a major announcement on plans to upgrade the U.S. military.

The Dow Jones Industrial Average was flat in pre-market hours as investors prepare for a busy day of economic data and earnings reports.

This morning, the U.S. Commerce Department is expected to announce that fourth-quarter GDP growth in 2016 was 2.1%. That is slightly above the first estimate released by the agency. However, it confirms that the United States never saw annual GDP growth of more than 3% during President Obama's entire eight-year term.

Markets are expecting a far better performance out of the proposed economic policies of President Trump. The post-election rally has seen the S&P 500 increase by more than 10% since Trump won the presidency. On Monday, defense stocks rallied after Trump announced plans to bolster military spending by $54 billion a year. Today, investors are looking for additional insight into his infrastructure spending plans and other major reforms like tax reductions and cross-border taxes.

Crude oil prices were flat despite news that OPEC members and Russia have complied with their plans to cut excessive global production. The markets are expecting counties that have made steep cuts like Saudi Arabia could surpass their reduction goals. In addition, traders expect laggards like Iraq and the United Arab Emirates will catch up to their reduction goals in the coming months.

But the big news is President Donald Trump...

One month into his presidency, Trump has successfully loosened the big pharma industry's grip on exorbitant drug price increases. And it's set to impact the industry in a big way.

For a sector that has historically relied on big price increases in order to bolster its bottom line, the shake up in the White House has many worried about the future. President Trump has called for stronger Medicare authority in negotiating prices and a "total overhaul" of the healthcare system. That's why if you're an investor in the pharma sector, you need to read this report that tells you the best way to protect yourself and profit from industry change.