Investing in Bitcoin was an exotic idea when I wrote my first Money Morning article about the digital currency back in June 2011.

Few had heard of Bitcoin. And most of those who had scoffed at the idea it would ever become more than a novelty, used only by nerds and libertarians.

Bitcoin was trading at about $20 when I discovered it in 2011. Just a few months earlier, in February, one bitcoin had traded at just $1.

Today the Bitcoin price is flirting with the $1,300 mark, an all-time high.

By now, the earliest investors have enjoyed astronomical gains. Those that bought at $5 are up 25,000%. The true early birds that got in at under $1 have gains anywhere from 125,000% to millions of percent. 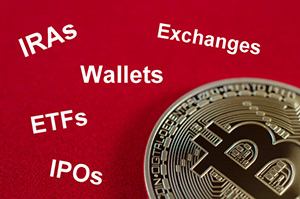 That first article I wrote for Money Morning got me hooked on Bitcoin. Soon after my first article was published, I bought a high-end graphics card to "mine" Bitcoin on my home computer.

What fascinated me at the time was that Bitcoin was a type of electronic money I could create on my computer - at almost no cost.

Plus, as a skeptic of the U.S. Federal Reserve and central banks in general, Bitcoin's lack of central control and limited supply also appealed to me. Central banks do more harm than good.

My Bitcoin mining operation lasted about six months -- until the card burned out from running 24/7.

Today such small-time Bitcoin mining is impractical to the point of being impossible. But by the time my mining days had ended, I was hooked on the idea of digital currencies. I even did some trading on the ill-fated Mt. Gox exchange (and paid the price in lost Bitcoins).

Since those days, Bitcoin has matured.

Over the past three years, it has drawn the interest of venture capitalists, big banks, Wall Street, and forward-thinking people in virtually every part of the world.

I've watched it all unfold and along the way have had the privilege of interviewing or meeting countless members of the Bitcoin community, from Bitcoin Foundation board member Vinny Lingham, to Chamber of Digital Commerce President Perianne Boring, to BitPremier Founder and CEO Alan Silbert.

And now recent developments, such as the three Bitcoin ETFs pending SEC approval, suggest the cryptocurrency has reached a tipping point.

One thing is clear to me and everyone in the industry whom I frequently compares notes with:  The Bitcoin price is headed much, much higher.

In other words, it's not too late to invest in Bitcoin.

Since most of you are likely fairly new to the idea that Bitcoin is here to stay, I want to share some tips with you based on what I've learned, so you, too, can get your share of Bitcoin profits...

Investing in Bitcoin Tip No. 1: Jump on the Winklevoss Bitcoin ETF

Right now the financial media is buzzing about the pending approval of the Winklevoss Bitcoin ETF (BATS: COIN) by the Securities and Exchange Commission. (The deadline is Saturday, March 11.)

Officially known as the Winklevoss Bitcoin Trust, this exchange-traded fund will make investing in Bitcoin as simple as buying a stock. For most retail investors, an ETF will be the preferred way to invest in Bitcoin.

And better still, the launch of one Bitcoin ETF will spawn more Bitcoin ETFs, which will bring more money into the ecosystem. And that, in turn, will keep driving the Bitcoin price higher.

A Winklevoss Bitcoin ETF IPO will be one initial public offering where it will pay to buy early.

The Winklevoss Bitcoin Trust will be backed by Bitcoin that the trust holds. It will be structured very much like the SPDR Gold Trust ETF (NYSE Arca: GLD).

I'm not the only one who sees the benefit of owning this ETF. Money Morning Options Trading Specialist Tom Gentile told readers last week why a Bitcoin ETF could be your best way to take profits.

In addition to the Winklevoss ETF, the SolidX Bitcoin Trust (NYSE Arca: XBTC) and the Bitcoin Investment Trust (OTCMKTS: GBTC) are both seeking SEC approval.

Approval of the Winklevoss Bitcoin ETF will open the door to other Bitcoin ETFs, with SolidX and GBTC at the head of the line. I believe multiple ETFs would be ideal for investors, offering more options and competition.

For answers to all the other questions you might have about the Winklevoss Bitcoin ETF, take a look at this special investor's guide...

Investing in Bitcoin Tip No. 2: Buy Some Bitcoin Directly

Do you feel COIN will be approved by the SEC?

Thanks for reading Money Morning. I think the chances are better than 50/50 the SEC will approve the Winklevoss Bitcoin ETF. The Winklevoss crew and representatives of the BATS BZX Exchange (where the ETF will trade) had a meeting with the SEC Feb. 14, which was followed by a ninth revision to the fund's S-1 filing a week later. Seems odd to have that kind of activity so close to the March 11 deadline unless there was a real chance for approval.

thanks Dave, I just read some tidbit on twitter, tried to find it again but lost it, anyways they felt there was a 75 percent chance approval. They based it off the final decision may include public interest which many want this to happen. I first learned of bitcoin from a report done by michael robinson a few years back. I just missed out on the timing of bitcoin but still have made some good returns as I am a hodler! Ibelieve bitcoin is something special and really expect the price to keep rising in the future. Look forward to reading more of your articles!
Jeff

Hi! I read the article and I'm interested in bitcoin investment, but I have read mixed opinion about if people should or should not invest in bitcoin. They usually say bitcoin is highly unstable and risky. So I wanted to ask you, why should I invest in bitcoin and why is it worth it, despite the fact of the continued increase in bitcoin price?

Thanks for reading Money Morning. I believe some of my other recent Bitcoin articles will answer your questions. Here I respond to six of the biggest Bitcoin myths. Here are the 2017 forecasts of 11 Bitcoin influencers. And here's a piece on how to buy Bitcoin.