The Dow Jones today rallied triple digits for the second straight session on expectations that the European Central Bank will take more aggressive action to stave off deflation and debt crisis, coupled with swirling optimism for the U.S. economy. 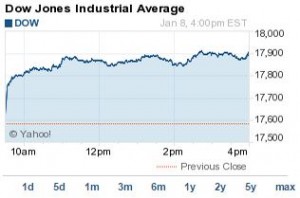 Tomorrow, the Bureau of Labor Statistics will release the December U.S. jobs report.

What Moved the Markets Today: Nine of 10 S&P sectors were up more than 1% on the day, with technology stocks like Apple Inc. (Nasdaq: AAPL) leading the way. Energy traders continue to seek a bottom for crude oil prices, although today's slight bump could be temporary as optimism for the U.S. economy fueled today's rally.