For July 16, 2015, here's what the stock market did today, the top stock market news, and stocks to watch based on today's market moves… 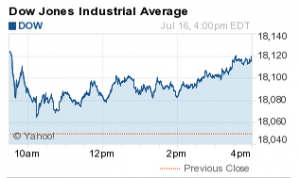 The DJIA today rose 70 points after companies reported strong earnings and concerns about Greece abated due to the country's parliament voting in favor of austerity measures to receive its bailout. Greece officials announced that the nation's banks will reopen on Monday and that it is looking for ways to allow citizens to bunch 60-euro withdrawals over the next few days.