For July 23, here's what the stock market did today, earnings reports, the top stock market news, and stocks to watch based on today's market moves… 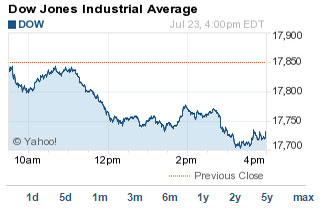 This morning, the U.S. Labor Department said that the total number of Americans seeking new unemployment claims hit their lowest levels since November 1973. Claims for benefits fell by 26,000 to a seasonally adjusted 255,000 for the week ending on July 18.

The worst-performing sector of the S&P 500 was the basic materials index (.SPLRCM), which slipped roughly 1.5% on the day. The index was weighed down after Dow Chemical Co. (NYSE: DOW) slipped more than 5% after the company warned of falling demand in China despite beating earnings expectations for the June-ending quarter.