For Sept. 16, here's how the Dow Jones Industrial Average did today, earnings reports, the top stock market news, and stocks to watch based on today's market moves… 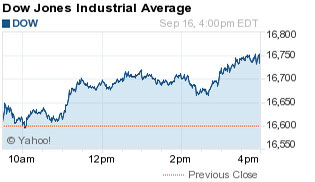 The Dow Jones Industrial Average today (Wednesday) added another strong day of gains as investors seem less expectant of an interest rate hike by the U.S. Federal Reserve in the wake of weak inflation figures today. Energy stocks pushed the Dow higher as declining crude inventory levels coupled with expected declines in shale oil production around the globe boosted oil prices. The S&P energy sector was up more than 2.8% on the day. The basic materials sector was the second-best performer on the day, with shares of Dow Chemical Co. (NYSE: DOW) leading the way with a 3.1% gain.

So, will the Federal Reserve raise interest rates? Don't be surprised if it does, says Money Morning Chief Investment Strategist Keith Fitz-Gerald. They've been wrong before on the economy and the recovery, and they're prone to making mistakes again. But if they do raise rates, here is a breakdown of the best types of stocks to own in the event of a rate increase.