For Nov. 16, 2015, here's the top stock market news and stocks to watch based on today's market moves… 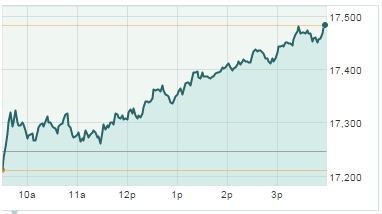 The Dow Jones Industrial Average today (Monday) gained more than 237 points as investors looked past the 2015 Paris terrorist attacks and oil prices surged due to geopolitical concerns. French airstrikes in Syria and news the United States is targeting the oil infrastructure and trucks used by ISIS pushed oil prices up and snapped a three-day losing streak for the commodity. Gold prices and silver prices were up marginally, just slightly more than 0.1% as traders anticipate the U.S. Federal Reserve will raise interest rates in December 2015.