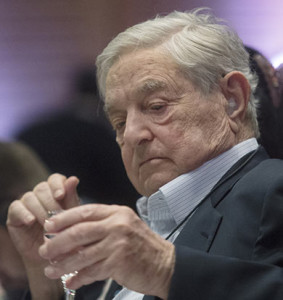 Republican bogeyman George Soros is once again trying to shake up the 2016 presidential election with his team at the International Consortium of Investigative Journalists (ICIJ) — which he owns.

You see, the consortium just revealed that GOP presidential candidate Donald Trump's real estate organization rented Manhattan office space from 1998 to 2003 to Iran's Bank Melli. Bank Melli is a financial institution that U.S. authorities later linked to terrorist groups and Iran's nuclear program in 2008. The ICIJ's story, "Trump's Organization Did Business with Iranian Bank Later Linked to Terrorism," was published this morning on its own website.

A trip to the organization's web page also reveals its support and funding sources: the Open Society Foundation (a George Soros outfit), the Ford Foundation, and a host of other Soros-affiliated outfits, such as the Center for Public Integrity (CPI) and American Prospect Inc. (a journalist training institution).

Soros' anti-Trump obsession is well-documented. For example, he's given $1 million to American Bridge 21st Century, a liberal opposition research super PAC that has been targeting Trump since he first announced his bid for the presidency on June 16, 2015.

Then in January, Soros told Bloomberg TV, "By fear mongering, Donald Trump, and the others, Cruz and so on, are doing the work of ISIS."

And in March, the activist investor committed $3 million to the super PAC Immigrant Voters Win this past March. The organization is devoted to increasing turnout in Hispanic areas with known low voting inclination.

All of these examples were blatant moves on Soros' part to sway voters from the "Trump train." 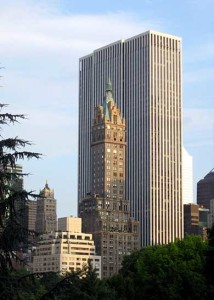 The GM Building in Manhattan that Trump purchased in 1998.

Trump inherited Bank Melli, one of Iran's largest state-controlled banks, as a tenant when he purchased the General Motors Co. (NYSE: GM) Building on Fifth Avenue in Manhattan in 1998.

This fact is a matter of public record.

Though, at the time, the United States had a sweeping embargo in place that prohibited Americans from doing business with Iranian companies, some Iranian organizations were granted licenses exempting specific transactions from sanctions.

The ICIJ admitted itself this morning: "The legal ramifications of the Trump Organization taking rent payments from Bank Melli are unclear."

That's because there weren't any legal ramifications to begin with.

You see, if any payments transacted through Bank Melli between 1998 and 2003 (under Trump's ownership and during Iranian sanctions) were indeed licensed, it may have been legally impossible for the Trump Organization to oust the bank because it was protected by the federal authorities.

And since the Treasury Department does not publicly disclose individual licenses granting companies exemptions from international sanctions rules, the public will never know if Bank Melli was operating in the GM Building legally or not.

Regardless, it's not a jump to assume the institution's legal status was viable, considering it ran uninterrupted as a licensed business in the center of one of the busiest cities in the world.

But according to the ICIJ's report, the mere presence of the bank in Donald Trump's mid-New York City real estate property links the billionaire businessman to terrorism…

You see, in 2008, U.S. authorities alleged that Bank Melli had been used between 2002 and 2006 to funnel money to a unit of the Iranian Revolutionary Guard that has sponsored terrorist attacks.

This period of time briefly overlapped with Trump's ownership years of the GM Building (between 1998 and 2003).

However, what the ICIJ failed to make clear was the fact that Bank Melli officially moved out of the property in 2003, for unknown reasons. That means Trump's organization presided over the building while Bank Melli was operative for only roughly a year.

Don't Miss: Donald Trump will win election 2016 in a landslide, according to survey results from this highly predictive anonymous question-and-answer application…

And, again, even if Trump had wanted to remove the bank from his property in the first place, it's entirely possible he'd have been disallowed due to federal intervention.

After all, it's Hungarian billionaire George Soros calling the shots at the ICIJ…