U.S. companies have been piling on debt thanks to the Federal Reserve's low-interest-rate policy - and that debt is about to get painfully expensive for some...

The Fed's trend toward raising interest rates risks setting off these "debt-bomb" companies - those that have exploited low rates to borrow more than they should.

The Fed has kept rates near zero for so long - mid-2008 was the last time the fed funds rate was as high as 1%. And companies may have assumed the lending-friendly environment would last forever judging by their high rate of borrowing.

In other words, companies have added debt at a pace faster than their ability to service it. 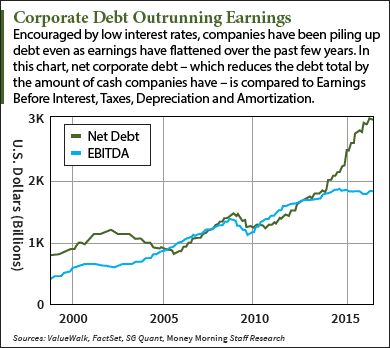 "Corporations are far more leveraged than they were on the cusp of the financial crisis," said Money Morning Global Credit Strategist Michael Lewitt. "Their precarious condition is disguised by eight years of zero interest rates. Now that the Fed is contemplating raising interest rates, their disguise could be ripped off."

The danger of these corporate debt bombs is becoming more obvious even with low rates, and it's a global problem.

So far this year 122 companies have defaulted worldwide - a pace not seen since 2009.

And that's with near-zero interest rates.

Imagine how much worse the corporate debt-bomb problem will get when central banks start raising rates...

How the Fed Will Light the Fuse on "Debt Bomb" Companies 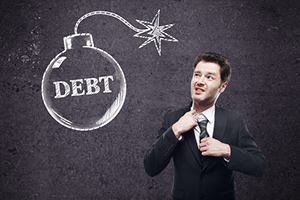 At this point it appears the Federal Reserve will lead the way in rate hikes, as the world's other major central banks show little stomach for changing course in the near future.

That means U.S. debt-bomb companies are in line to go off in greater numbers as the Fed tightens.

Right now the markets expect a rate hike at the December FOMC meeting. And the Fed members themselves, via the "Fed dot plot" they published in September, see interest rates rising past 1% next year, close to 2% in 2018, and past 2.5% in 2019. That's a big series of jumps from the 0.25% rate we have now.

A steady drumbeat of increases will put a lot more pressure on overleveraged companies. Not only will taking on new debt get much more expensive, so will refinancing old debt.

"Bond and bank loan investors don't want to report defaults to their investors if they don't have to. So they are perfectly content to allow borrowers to 'extend and pretend' their loans until sometime in the future when they are forced to face the music," Lewitt said.