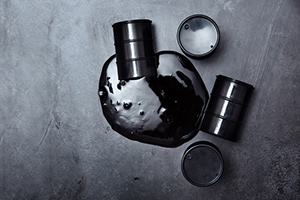 This morning, the Dow Jones Industrial Average is falling as investors weigh another round of earnings reports from companies including The Coca-Cola Co. (NYSE: KO) and Boeing Inc. (NYSE: BA).

Traders are also keeping a close eye on oil prices, which are ticking down in pre-market hours thanks to renewed doubts over the OPEC production cap deal.

Right now, three major triggers have the global economy on the edge of collapse. That makes having a stock market crash investment plan a necessity for all investors.

And you can take the necessary steps to protect yourself from these three triggers with our handy guide.

On Tuesday, the Dow shed 53 points as investors weighed a mixed round of quarterly earnings reports and forward guidance from a number of large-cap companies. Yesterday, shares of Under Armour Inc. (NYSE: UA) cratered more than 13% after the firm reported its weakest quarterly sales growth in six years.

Now let's look at the most important market events and stocks to watch today, plus your economic calendar, for Oct. 26, 2016.

The Dow Jones Industrial Average projected a 41-point decline as investors prepare for yet another busy day of earnings reports. With earnings season in full swing, there's a trade shaping up that could earn investors a bundle. This is a simple story about fundamentals, and it is time to consider using call options for big gains from this "defensive" stock. Read all about it, right here.

The Tesla earnings report will be released after the bell on Wednesday. We expect that the stock could be volatile as it is already off 0.65% in pre-market hours. If you own TSLA stock or are considering it, there are three distinct keys to understanding where Tesla is heading next. We break them down, right here.

The price of crude oil today is falling again as traders fret about the possibility of another global supply glut. The worries reemerged after a top oil official in Iraq demanded that his country be exempt from OPEC's planned production cuts to support crude prices. On Tuesday afternoon, the American Petroleum Institute announced that U.S. inventory levels increased by 4.8 million barrels, easily topping analyst expectations of a 1.7 million increase.

But the big story in pre-market hours is Apple Inc. (Nasdaq: AAPL). Shares fell 2.9% in pre-market hours after the company released its Q3 earnings after the bell on Tuesday. Although the world's most valuable publicly traded company topped expectations for earnings per share (EPS), Apple saw a small miss on revenue estimates and a decline in iPhone sales. The company did say that it expects stronger sales in China and that it is just getting started in India. The firm's cash hoard has now reached a staggering $237.6 billion. With shares sliding this morning, a buying opportunity is emerging for AAPL stock. Here's the latest on the AAPL earnings report and how you should play the stock next.