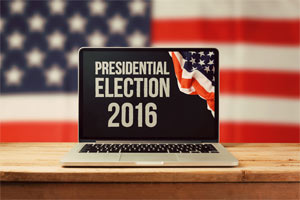 It's a tight presidential race.

That means if Clinton wins, it won't be by a landslide.

Trump is also behind Clinton in Google searches across the United States.

Data released by Alphabet Inc. (Nasdaq: GOOG, GOOGL) this morning shows Clinton dominates search in 30 states, including in the battleground states of Florida and Pennsylvania.

The world's No. 1 search engine also reported that "race issues" is the top Trump-related search topic, followed by "immigration" and "abortion."

As for Clinton, "abortion" is the top-searched issue, followed by "immigration" and "race issues."

And altogether, Google has seen an incredible 233% more searches regarding "how to vote" than it did compared to the same period before the 2012 presidential election.

Google is also reporting some rather interesting "top-searched terms" for the presidential election today, including:

Now, here's a look at the top-searched terms for each candidate on Election Day — including one question that seems to suggest Clinton's secretly a Republican…

Clinton Wins Google Search, Though Some Suspect She's a Republican

Here are the most popular search terms related to Hillary Clinton on Election Day 2016:

And here are the most popular search terms related to Donald Trump on Election Day 2016:

He says the last thing the markets need right now is mass uncertainty.

Here's a look at how the election is weighing on Wall Street, and why you shouldn't worry about it… yet…