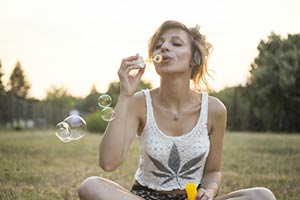 The marijuana industry is booming. And with $6.7 billion in sales in North America in 2016, we have our eyes on five marijuana stocks to watch now.

That's because 28 states and Washington, D.C., have some form of legalized marijuana laws. So it's only a matter of time before marijuana is legalized in every U.S. state.

And because there's more to the marijuana industry than just selling cannabis, there are a lot of ways to profit from legal marijuana sales.

In fact, the first "marijuana" stock we show you may seem surprising…

Scotts Miracle-Gro Co. (NYSE: SMG) is one of the best-known lawn and gardening companies in the country.

But despite its strong reputation, revenue growth became stagnant during the financial crisis of 2008 and 2009.

So in order to boost sales, CEO Jim Hagedorn made a controversial decision: He started to invest in the marijuana industry.
In 2015, Hagedorn bought two companies that make marijuana fertilizer, soil, and accessories. He also invested $120 million in hydroponics equipment firm Gavita International in 2016.

The SMG stock price has climbed over 50% in the last 12 months. Aside from its impressive growth, Scotts also offers shareholders a dividend of $0.50 per share.

Through a partnership on the cloud, Microsoft Corp. (Nasdaq: MSFT) is becoming a technological leader in the marijuana industry.

KIND Financial – a firm whose technology ensures safe financial transactions in the marijuana industry – formed a partnership with Microsoft to run its software through Microsoft's cloud.

The need to ensure safe and compliant transactions will become even more important as marijuana sales become bigger.

This is another boon for Microsoft's cloud services, where the company already expects to generate $20 billion in commercial cloud revenue by 2018.

General Cannabis has a market cap of $50.68 million. Over the last 12 months, the CANN stock price has climbed over 334%.

GW is currently working on a product called Epidiolex, which is intended to help patients with epilepsy disorders.

What are five marijuana stocks I should watch in 2017?

But because marijuana is a Schedule I drug, it's difficult for GW to offer more plant-derived therapeutics.

However, marijuana legalization and reform could result in cannabis being reclassified. If that happens, GWPH will be able to develop even more therapeutics and products.

GWPH has skyrocketed over 113% over the last 12 months. In comparison, the Dow Jones Industrial Average has climbed just 21.53%.

MCig Inc. (OTCMKTS: MCIG) is based in Nevada and provides vaporizers, greenhouses, marijuana home growers, and cultivation rooms.
In addition, mCig owns Rollies LLC. Rollies makes smoking tubes, which could climb in sales as recreational marijuana becomes legalized across North America.
In its 2016 fiscal year, mCig made $1.7 billion in revenue and $290,774 in gross profit.

So far in 2017, the MCIG stock price has climbed over 40%.
As a service to Money Morning readers, we're now making available a 90-page cannabis investing guide called "The Roadmap to Marijuana Millions."